Too Pee or not to Pee

Too Pee or not to Pee

My best hunting buddy Denis and I decided we would go on our first moose hunt without " adult supervision" meaning our dad's.

We had hunted with them in the past and now of course we knew everything there was to know about hunting moose. Not just any moose, but Bull Moose.

We packed our gear, sighted our rifles and most of all got our food precooked and packaged by our mom's. We were ready to tackle the bush and come back with our imaginary 1000 lbs bull. 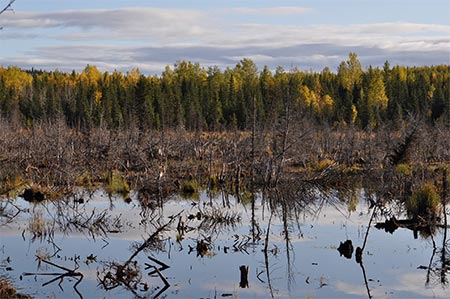 Moose Hunting Tip: Peeing in water, is a good way to attract moose.

As we drove to our hunting grounds we talked over our plans and how we would bag the big one and show our families we had graduated to the big leagues. Our dads had chuckled a little and then told us when we got skunked that the near by butcher shop did sell moose steaks at a good price.

We arrive safe and sound. Set up our tent and began scooting the area. For 2 days Denis would make moose calls, or should I say crow calls with no real effect.

Then one night at about 11pm while we were sitting by the fire, Denis made a practice call.

I had my back to him and then he made a second one. It was perfect!

I looked at him and said awesome man. That was great. His eyes where the size of dinner plates.

He said in a squeaky voice, "that wasn't me!"

Holly mac it was a moose and it was close! We were so scared we climbed in the car and sat there with all of the lights turn off, windows slight opened and ears on full alert. I was never so scared in my life. We could hear sounds all around us but never knew what it was.

We slept in the car that night. Well, I didn't sleep but felt safe in my Pontiac.

The next day we found tracks all around our camp site. We tracked the moose and found it in a small swamp eating grass from the water.

It was amazing to watch this Large bull completely submerge his head into the swamp water and come out chewing grass and lilies.

Denis and I came up with a plan on how to get this moose into a clearing and full line of sight to take the shoot.

At the north east end of the swamp there was a small mountain. Denis was going to hike to the top of the ridge and get ready to shoot the moose as it cleared the swamp.

My job was to get the moose to that area. I had the perfect plan. My dad had once told me that bull moose was attracted to the sounds of a female moose urinating in the water. That particular sound made them crazy and would come running.

Well I learned that this fact is true or so I think.

I hiked around the swamp to where I expected my sharpshooting buddy to be posted. I gave him the 45 minutes he needed and then began my plan.

I slipped into the swamps edge, took out my trusty tin cup and began pouring water into the swamp trying to make sound like a cow urinating.

I poured for like 20 minutes and came up empty!

In the water up to my ankles I decided to take a break. As I turned around to walk out of the water, there 60 feet to my left was the largest bull moose I had ever seen.

He was looking straight at me, chewing, snorting and just plain confused. He never ran away, he just seemed amazed that a hunter, with no rifle with him would be pouring water into his swamp.

My legs slowly began to shake. My feet felt like they where welded to the ground.

I swear I could feel my heartbeat in my ear drums. I kept praying that Denis could see this bull and take the shoot.

Who would be the victor?

I must have eventually bored the moose or I think he just finished chewing his meal, he took two steps back, turn his head to me and let our a HUGE grunt and trotted off into the swamp.

Oh My God! I just survived a moose encounter. I stepped away from the swamp and kissed the ground.

I wondered why Denis had not taken the shoot. I gather my rifle and walked up the mountain. I came to the top and sure enough found my trusty partner. Hunkered down into the prone position, rifle load and ready, facing in the wrong direction.

His back was the swamp. Not more than 150 yards straight behind him was our prize bull.

Well we did learn a lot on that trip but most of all, that Denis could not use a compass.