Moose facts are plentiful and many articles have been written about deer, unfortunately this is not the case about moose. The number of publications about other members of the deer family far outweigh those of moose. We hope to provide some of the facts about moose on this website.

Moose are easily recognized by their palmate antlers, while other members of the deer family have twig like antlers.

Where do Moose Live?

Moose predominantly live in the mixed deciduous and boreal forested areas of the Northern Hemisphere preferring the sub arctic and temperate zones. Moose do not fair well in areas where the mean temperature is above 65 Fahrenheit (18.3 Celsius) as they go into heat stress at this point. 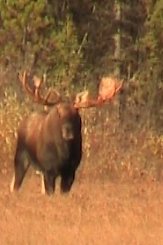 Alces Alces is the scientific name for Moose... in Britain they are known as Eurasian Elk and in North America as Moose. Elk in North America refers to an entirely different animal sometimes referred to as Wapiti.

Plural form of the word moose?

The word goose has a plural which is geese, moose on the other hand has no plural. Any reference to meese or mooses is incorrect. 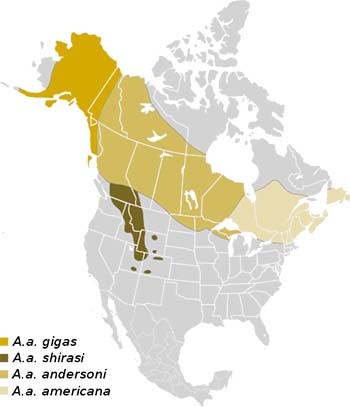 There are four sub-species of moose that have been accepted by scientists and biologists as the current classification. Of course, as science and knowledge grows this is always subject to change.

It is widely accepted that moose of North America all came from Siberia somewhere during the last glacial period (Wisconsin) around 10,000 to 14,000 years ago.

It has been hypothesized (Peterson 1955) the northern or tundra moose were separated from their three southern counterparts by vast grasslands.

Regardless the moose of the tundra are much larger and do behave somewhat differently than their southern counterparts.

The four sub-species of moose are:

A. a. means: Alces alces

In English, the Latin name Alces means "elk". In Europe the word elk and moose are synonymous, moose are also referred to as "alg".

Only the male, called a bull moose grow antlers. Moose antlers start their growth in the spring of the year, during the period of growth which lasts until the autumn the antlers are covered in what is commonly known as felt.

This felt brings a rich supply of blood to the antler which aids in their growth. If the felt is injured during this period the Moose antler may suffer a blood supply loss and grow abnormally.

When fall arrives the antlers cease to grow and the felt starts to deteriorate and fall off. At this stage the Moose will start to rub his antlers on bushes and trees to rid himself of the felt.

A wildlife biologist, Dr. Vince Critchton has documented Moose eating this felt. It is unknown why the Moose behave in this way.

The antlers grow at right angle to the moose head, the growth is cylindrical at the base while the rest of the antler splits into several tines or points. As a moose ages, the larger the set of antlers is that he grows. This larger set of antlers will be palmate with tines.

Moose are mostly daytime active and sleep during the night, although moose have been observed feed in meadows on well moonlit nights. They are typically solitary animals and the strongest bond is between the cow and her calf.

I have seen bulls grouped together in bachelor herds. Calves are aggressively chased away from their mothers when they are just one year old just in time for her to give birth to a new calf.

The mating season called the Rut happens in late September and goes through October. The bulls look for several cows to breed with and will compete with other males to show superiority. These fights are usually nothing more than posturing; show each other their antlers and body size, trying to intimidate the opponent.

During the rut, bull moose create wallows to attract females to breed. These are simply a mud pit or depression in which the bulls urinate and lay in.

The fights will sometimes involve the antlers in which the pair will push and twist the other to show their strength. Some of these fights will lead to severe injury or even death can result. During this time the animals call to each other, they are easily mimicked using moose calls of a variety of types.

A full-grown moose has few enemies, but a pack of wolves can still pose a threat, especially to females with calves.

Wolves typically hunt moose as a pack although individual wolves have been known to hunt adult and kill adults.

Black Bears fresh from their den in the spring will prey on newborn calves and the elderly moose for the first part of the year. Later as food becomes more plentiful the black bears will only pursue moose as an opportunistic meal.

Brown Bears also known as Grizzly Bears will prey on moose throughout the year and will certainly take over a wolf kill if they chance upon one. Bears are opportunists, on many occasions Hunters have returned to retrieve a killed moose only to find that a bear has laid claim to it. This is a dangerous time for the hunter; Brown Bears will defend their new-found meal vigorously.

People who live in wilderness and rural communities, those who depend on moose for food and hunters are the ones who are the most passionate about moose.

In Alaska there was once a time when professional hunters would supply moose meat to mining camps. Those days are gone now but moose meat still plays an important role in the meat supply for the people of the northern hemisphere.

In Alaska alone the annual moose harvest is upwards of 8,000 moose which translates into a whopping 3.5 million pounds of meat. Moose Fact: Moose are hunted in almost every country they are found in; the meat prized by many is very similar to beef in taste and texture with a young moose being described as veal like.

British Columbia a province of Canada is twice the size of Sweden and has a total moose population of about 170,000 animals. In Sweden the annual harvest of Moose is close to 150,000 animals this is twice the entire harvest of North America. In Sweden, no fall menu is without a mouth watering moose dish.

Our house is no exception, we cook moose on a regular basis and have shared some of our favourite moose recipes with you.

Generally moose would not be considered as aggressive towards humans, but like any Wild Animal we must respect their space, and if we were to encroach to close, well..... Watch out! During the mating season is when moose are the most aggressive amongst themselves and would pose the highest risk to Humans at this time.

This moose fact should not be ignored! When harassed or startled by people or in the presence of a dog, moose may charge.

I remember a time when I was out collecting firewood during the fall deer hunting season. My dog, a Labrador Retriever smelled something on the ground and started to make some loud sniffing noises. Suddenly there was bull moose charging from the forest, which, thankfully caused my dog to bark and the moose ran off.

Fun Question:  Find out the answer here... Do Moose Drool?

Moose and vehicles do not make a good mix. In Sweden they fence the highways to prevent the animals from getting hit by automobiles. In northern and south-eastern British Columbia the forests are cut well back from the edges of the highways to provide visibility to motorists.

On some stretches of highways is British Columbia the highways are also fenced similarly to Sweden. Because Moose have long spindly legs a collision with a vehicle will result in the body portion of the moose landing on the vehicle and because these collisions are at high speed the Moose will smash the vehicle, doing considerable damage.

No-one wins in these situations, for even if the Moose survives he likely has broken legs and would have to be destroyed.