First nation tribes honored Moose and Spiritualism. There were firm beliefs that honor of the moose (or deer) would ensure the success of a hunt.

How does this honor that is bestowed upon the moose deer play in today's society, if at all?

Do you believe there is any connection between a hunter and the hunted?

Just recently I was reading from a couple of books. One by Dr. Valerius Geist entitled Mule Deer Country the other Ecology and Management of the North American Moose edited by Frantzman and Swartz and came upon similar passages referring to the moose (or deer) and spirituality.

The authors wrote of first nations peoples that believe in an honor system  - as it were. 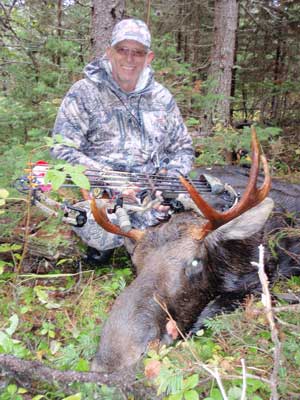 The hunters in return would hold the animals in high respect, even to hold great ceremony at the death of one of these great  beasts.

The was also a belief that to disregard the respect due the spirits would bring disease and illnesses to the first nations people.

Have you ever considered there a link between moose and spiritualism?

Personally, I found these writings very interesting. I took some time to ponder the points and reflect on my own hunting past.

I seriously wondered - Had I ever witnessed or been part of such spiritualism?

"The bull we saw and killed wanted to be killed!"

When I reflected on my own hunting past... hmmm? Could be?

My latest hunting trip may be just pure coincidence or maybe, it is a case of moose and spiritualism.

This last moose hunting trip was not normal. Not normal in the sense that I saw a lot of moose and had several chances to kill a moose.

No, this year, the moose seemingly were scarce.

I don't know for sure, but I believe all the active logging in our hunting area had caused the moose to move out or be quiet (IE: not responding to our calling).

We hunted hard for 10 days and only saw one bull moose in the same area where I saw 11 last year (in the same time period).

The bull we saw and killed wanted to be killed!

You must think I'm off my rocker, but wait, let me finish. See for yourself if there is and moose and spiritualism connection here.

I do hold moose in the highest esteem. In fact when I first started this website I would capitalize the word Moose every time I typed it. My sister-in-law who is a writer stated: "you must worship moose to write like that, that is not good writing."

I have been very blessed during our years of moose hunting. Only once in 23 years did someone in our camp not kill a moose.

This year, on the day we killed our moose, well, it was meant to be.

We had gone out well before it was daylight. We walked in to our hunting area using our headlamps all the while studying the ground looking for fresh sign that would signal to us a moose may have moved in during the night.

We set-up our Montana moose decoy and called about every 15 minutes until lunch time. We discussed the lack of any moose response on that morning. It had been a cold, crisp morning with no wind. The sounds of our cow moose calls could be heard echoing into the valley far below. Yet, we heard nothing that morning.

At lunch time we walked back towards the ATV, while we walked we noticed some new tracks in the mud. Neither of us recalled seeing those tracks on the way in that morning.

We actually discussed this fact, quite loud too. As opposed to whispering that we had been doing all morning.

After all, we were on our way back to camp. The morning hunt was technically over.

We walked in silence for some 10 minutes after that. It then occurred to me that the narrowing of the road would be an ideal location to set up a trail camera.

I turned around to tell this to my partner.

"Tyler - get off the road! There's a bull moose following us!" 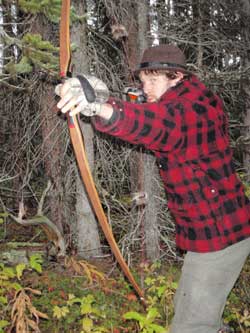 I looked back, and to my astonishment there, following us was a bull moose.

"Tyler - get off the road! There's a bull moose following us!" were the words that came out of my mouth!

Now I don't mean the bull was a half a mile behind us... no, he was about 40 yards or so and walking quickly in our direction.

He was following us and we were in plain view!

I stepped off the overgrown logging road road while my partner Tyler stood there trying to figure out just what the heck I was talking about.

"Tyler - get off the road! There's a bull moose following us!" I repeated myself, slightly louder this time as though he didn't hear me the first time.

I looked up again...

OMG, the moose was trotting in our direction!

Was there a Moose and Spiritualism connection here!

By the time Tyler moved, turned around and looked up, the bull moose had closed the distance.

The bull spotting some sort of movement (I was frantically trying to get my bow ready) slammed on the brakes.

At that point he stood a mere 10 feet from Tyler!

I didn't see Tyler's face, I was too busy, but I can imagine his eyes must have been bugging out!

To cut the story short (we'll save the balance for another hunting story) I arrowed that moose.

He died only about 75 yards from when I shot.

Do you think there is some sort of moose and spiritualism connection here?

Did I just experience some sort of moose (deer) spirituality? Did this moose in fact offer himself to be sacrificed?

Did God provide a moose to provide for me?

Or, was this only coincidence?

Funny! As I mentioned previously, I've always held moose (and all big game) in high regard. My fervor for knowledge about moose would tell you that if you knew me. I don't want to be bragging here but my hunting successes have been higher than most hunters I know.

Maybe there is after all, a spirit that connects us to wildlife and all living things. I guess now it's up to you to decide.

Moose and spiritualism for you too?

Top of Moose and Spiritualism
Return to Moose Facts
Home