So,why do you trophy hunt? Why would you want to shoot a world record moose? Our society has become a place of “Bigger, Better, Faster and More”, does this fit with trophy hunting too? Have your voice heard!

Come on hunters, let us hear from you!

Is trophy hunting a contest to you? Do you hunt trophies to get your name in a record book? I should hope not!

If you are in search of a record book moose because he has survived many previous hunts, and you as a hunter respect the survivability of the animal, then you have set a high standard for yourself.

Do we need to continue to search for the ever bigger? Then when we find it, is it right to destroy it? Should we limit the very essence of the mighty beast; snuff out the possibility of procreation? These are tough questions? 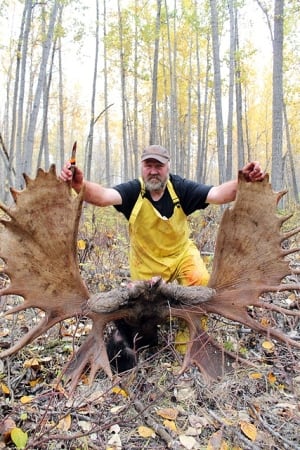 Hunter Heinz Naef shot what he believes could be the largest moose ever harvested in Yukon last month (Sept. 2013). (Photo courtesy Brian Naef)

His moose, scored 263 1/8 inches after the required drying time of 60 days. The official scoring will be made in Nevada in early 2014.

Heinz is not a trophy hunter, he wasn't looking to harvest a world record moose. No, he is a meat hunter... by his own admission. He was just out looking for any legal moose to fill his freezer. It just so happened to be this one.

Human beings have pushed everything to its limits. The Guinness Book of World Records is a testament to this. We strive to better ourselves, to beat our predecessors, going beyond what anyone has done in the past. Is it wrong to have the desire to be better, to do it bigger? Is our only purpose to get our names in a book?

When enter animals into record books, who deserves the respect? You or the animal? It is vitally important to include all relevant information about said trophy... the hunters name however may not be so important.

I have a few trophies on my wall, not world record moose, but trophies to me. I did not go hunt with the sole purpose to acquire a trophy, and likely many of you, may scoff at my trophies. They are not in any record book, nor are they of that class. To me they are the reminder of the hunt, a way for me to show appreciation for the animal.

No animal should be killed for the sole purpose to raise a hunters social status, to do so is crossing the ethical line for hunters.

Sidebar: You may also be interested in what other hunters are choosing and using for big game rifles. We have a running survey to find the most popular moose hunting rifle. Follow this link and see how moose hunters are responding to the question. We get a lot of mail requesting advise to choose the best moose hunting rifle.
I have shared my opinion, you should too!

Where does one find a world record moose? This question is one that I am sure no one person can answer. Through research and dialogue you may be able to locate moose habitat that will contribute to the growth of these monsters. A hunter in search of a world class moose will spend a lot of money and time to achieve his goal. These big moose are not going to be easily accessible. Days, weeks even years of pursuit to harvest a moose that can make the record books will be the required dedication. Hunting the most remote areas of the planet is what it will take.

Luck it would seem plays a huge role in getting these big animals. In an interview with Pat Lefemine, founder of Bowsite.com, Chuck Adams said (regarding world record animals) “I never discount luck. Luck is a huge part of [hunting] and I attribute the fact that I have the world record Yellowstone elk to pure luck.”

As an example the latest world record moose taken with a rifle, shot by Jay Link in 2001. Jay travelled to Russia, to the very remote regions to get this moose. He has stated it cost him $20,000.00 to do this hunt (before shipping and taxidermy). Jay may not have been looking for a world record when he shot this one, but he was certainly looking for a world class moose. Unfortunately for Jay, because the moose was taken in Russia, it is not eligible for Boone and Crockett.

In 2004 Eric Arnette scored big, really big. According to the Boone and Crockett Club, Eric’s great Alaska-Yukon moose was officially scored at 236 B&C points. This will make it stand at 118th on the all-time list.

At this writing the world record moose, Boone and Crockett scored 261 5/8 and was taken by John A. Crouse in 1994 near Fourtymile River Alaska.

If no-one shoots a world record moose how would we know if it exists? It is not like you can run up to it and take some measurements! How can we share these experiences with our fellow man? Of course the argument will be made to take pictures and let the beast live. Why go to the moon then? Could not we just take pictures in this case too?

I would not or will not support any type of trophy hunting of any kind of endangered species, that would be unethical.

The question to shoot or not to shoot a world record moose is an ethical dilemma.

Personally, I do not put much energy into chasing after the monarchs of the moose kingdom. Just getting a legal moose so that we can share the hunt and the moose meat together with our families is, in the end all we ask.

I suspect that a world record moose would not be worth eating! A giant of the species, a huge body and a monstrosity of an antler set, the last of its kind. Or would it be? Records, it would seem are set and meant to be broken, this must hold true with trophy hunting too! Where does it stop though?

Of course there is much debate regarding trophy hunting, especially among the anti-hunter movement. We can all muster up some kind of opinion on this.

As a hunter, I value the opportunities to venture out into the outdoors and hunt. The chase is wonderful and exhilarating. To some degree the kill is saddening (for me). A wild animal has paid the ultimate sacrifice for me; I always pause and give thanks for any animal that I harvest. I truly appreciate it! I do not hunt for the trophy; I figure that antlers will make poor soup. Given the opportunity though, if a world record moose were to walk out in front of me, and assuming I would recognize it as such. Would I shoot...? Would You?

Would you shoot a World Record Moose?

The debate about hunting is always ongoing. I ask this question not to provide fuel for the anti-hunters, but to give hunters a chance to voice their opinion. Would you shoot a World Record Moose (or other big game animal)? Tell us why or why not! I know there are lots of opinions out there. Lets hear them!

What Other Visitors Have Said

Click below to see contributions from other visitors to this page...

Trophy Hunting Bull Moose or Sustinance hunting
I have mixed feelings on Trophy hunting bull moose. Over the last 45 years that I have hunted (and my dad 60yrs/ Brother 45yrs) we have harvested many …

FOR THE RECORD
What constitutes a world record? Large antlers-massive bodies, boss of the bush? Well I have lived in n/w Ontario all my life - I am 60 years old - …

Meat Hunter First
I always shoot the first legal animal I see. It doesn't matter about size or age because you might not see another legal animal and I need the meat. …

Possible World Record Moose
This moose would break all records including rifle! Caught on Camera several times but never seen in person. Not sure if he will start to shrink …

Killing a Trophy
I've never been Moose hunting and I am not a trophy hunter. I am a meat hunter, BUT if I am hunting and the good Lord places a trophy animal in front of …

1993/94 World Moose Calling Champ
Yes, I would shoot a World Record Moose. I am a two time World Champion Moose Caller & although I have shot many Moose, mostly Calves, I don't have a …