Or are these practices doing the opposite of habitat destruction and enhancing it?

Over the past several decades the provincial government of BC has put into practice of fighting forest fires. This  along with the warmer weather has or contributes to the population explosion of the mountain pine beetle.

"The Pine Beetle has led to wide spread deforestation and habitat destruction in British Columbia and through much of the Northwest.

The mountain pine beetle, Dendroctonus ponderosae, is a small insect, less than a centimetre long, which lives most of its life under the bark of pine trees, including lodgepole, ponderosa and western white pine." 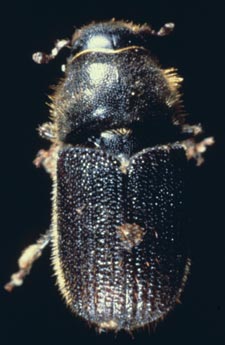 Like most things on this earth, the mountain pine beetle is here for a purpose. They will attack weakened trees and kill them, feeding on the tender portions under the bark. Once the cycle of egg laying is complete the beetles will move to a new host.

In the past, forest fires and cold winters have kept the mountain pine beetle population in check. Fires will destroy them along with the trees they have killed and the extremely cold winters will do the same.

Unfortunately, the climate is warming and fires are being put out.

How does this logging affect habitat destruction?

According to Natural Resources Canada:

"At the current rate of spread, 50 per cent of the mature pine will be dead by 2008 and 80 per cent by 2013. The consequences of the epidemic will be felt for decades in British Columbia. The beetle is also posing a real threat to Alberta’s lodgepole pine forests and the Jackpine stands of Canada’s northern boreal forest."

Widespread logging is happening to harvest the trees while there remains a market value in the trees the beetles have killed. Forest companies are working non-stop to harvest this wood.

The results are huge cut blocks of waste. Piles of unmarketable logs left to rot or be burned during the winter.

Take a ride with me through an area of habitat destruction and see for yourself.

Granted, to look upon these forests and see them dying is a sad state of affairs. Many people have protested the wide spread logging, and I must admit, after viewing the logged areas it is not a pretty sight.

Once logging is complete in a specific area, the waste wood is piled and readied for burning. The dead and dry wood caused by the Pine Beetle, results in substantial amount of wood waste when the logging companies harvest the timber. Once the threat of fire season has subsided, usually mid October the slash burning, as it is called; begins. The piles of wood debris are set on fire and allowed to burn completely. During these periods of burning fires and smoke can be seen for miles around, it is quite a sight to see the mountains glowing red during the night. 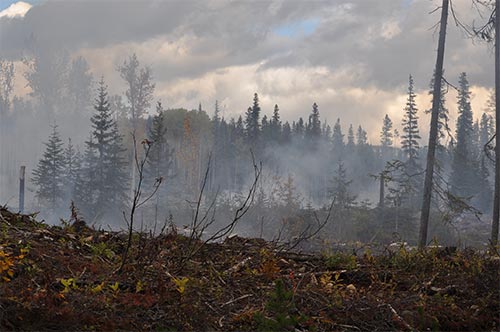 Often, the next summer these areas are replanted with new seedlings to begin a new forest.

Really though, if you consider the long term effects, the habitat destruction will be short lived and many wildlife species will benefit. Moose in particular will move into these logged areas after the new growth has reached about two or three years in age.

The Moose population in British Columbia has spread out as a result of logging, mining and land clearing. From the early settlers to modern day logging the changes in the dense forest have allowed the Moose to multiply. There are many areas of the province that traditionally have never supported Moose but now have a large population. An example of this is before 1932, the Merritt and Nicola region of British Columbia had never seen Moose. In modern day time the Moose population in these areas now support an annual Moose Hunt.

So new are Moose in the Caribou and Chilcotin Region that the First Nation tribes of the area had no word for Moose in their native language.

As a hunter, I do not particularly care to see the clear cut areas, quite frankly they are ugly; on the other hand I understand and willingly accept the change. I look forward to see the new growth and the enhancements made to moose country as a result of the initial habitat destruction. 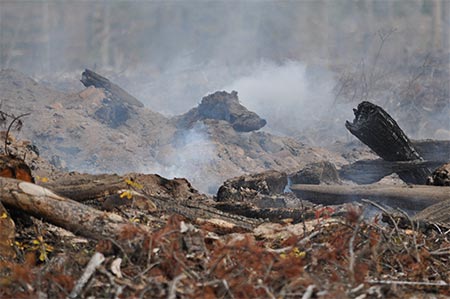 In the one area that we prefer to hunt Moose, the Pine Beetle has done its work but the logging companies have yet to do any logging in the area, we hope they do. There has been no logging done in this area for a number of years and although we do get our moose every time we go there, they seem to be harder to come by. In some senses we look forward to the habitat destruction so renewal can take place.