Moose populations in British Columbia are being severely impacted by the Winter Tick (Dermacentor albipictus), here is a little about what we know about these pests and the impacts they are having on moose. 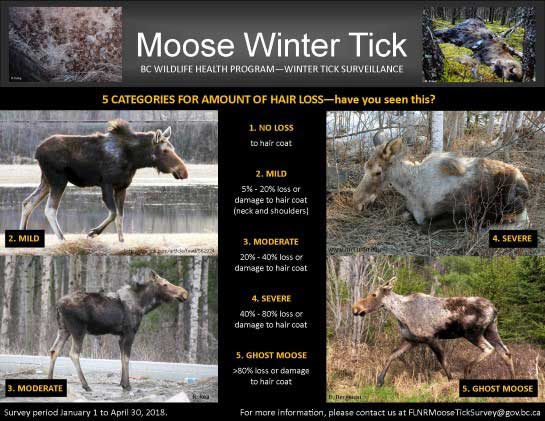 The moose is the preferred host of the tick, but they are also found on deer, elk and bison. Not to worry, these ticks don't like humans so you won't find one of these guys on you.

Eggs are first laid in the loose leaves on the ground by mature female ticks in the spring of the year where they lie dormant until hatching in late summer (can be several thousand).
The eggs will turn into larva which ascend the low shrubbery and congregate and wait in ambush for an unsuspecting moose host. The larva will grab onto a moose as it brushes up against the cluster of larva.

The larva, soon after attaching will take a blood meal and then will soon become a nymph. The nymph stage is one of dormancy as it hides well hidden in the winter hairs of the moose hide where it is protected from the elements.

By January or February of the following spring the tick larva develop into adult ticks. Once the adult stage has been reached the ticks will mate and begin engorging themselves on the hosts.

Keep in mind that these ticks do not burrow under the skin of the host, they just drink the blood and while doing so the body of the tick swells with the blood of its host.

It's pretty gross actually, to see a bunch of ticks swollen and engorged clinging to their host. I pulled one off my horse one time and squished it atop a fence post, I couldn't believe the amount of blood one of these critters could hold. What if there are hundreds or thousands of the blood thirsty pests on a host? How much blood loss would that contribute to?

Mid-March through April is when the ticks take leave of their hosts and fall to the ground, just to start the entire cycle over again.

But, what about the moose? How are they affected by playing host to these parasites?

A few ticks on a moose would cause no problem at all, but when the poor moose has 100,000 ticks on its body that becomes a problem!

It's a two-fold problem really:

One, when there are so many ticks on a moose host, there can be a tremendous blood loss which will make a moose anemic. Anemia would of course result in many other health issues, like the inability to store fat, reproduction would also be affected (unborn calves will suffer malnutrition) as well as the irritation factor which lead to the second problem.

With many winter ticks attached to a host, the moose will become irritated (itchy I suppose), so what do you think a moose would do? Well, they will scratch and rub against trees and shrubbery to rid themselves of the ticks.

The problem here is that because moose hair is hollow, it is also brittle. The hairs will break and fall off, and the ticks will persist. The moose will continue to rub, sometimes leading to substantial hair loss to as much as what would be considered severe with 8% of observed moose (during the study published May 2015). Severe hair loss would contribute to a higher mortality because of the inability to insult from the elements.

Moose with severe hair loss are referred to as "Ghost Moose", because of their white appearance.

A higher mortality rate may be associated with high numbers of winter ticks, and certainly the impact on juvenile moose would be significant.

Why are we seeing moose winter ticks more now, than in the past years?

Global warming, climate change, less snow, warmer winters; however you want to call it, these are the contributing factors to the spread of the winter tick.

What can be done about it?
More study!
At this point, biologists are still trying to determine how wide spread and how much impact the tick is having on British Columbia moose. Even the Yukon Territories and Alaska are monitoring their own moose populations as the winter tick seemingly expands its area northward.

The British Columbia Government runs an annual winter tick survey where it asks residents to fill out a survey of observed moose. If you see an infected moose in BC, please report it.

The BC Government is accumulating data and hopefully will come up with some sort of plan to deal with the pests. The latest report can be viewed here.