Some symptoms of moose brain worm: tilting of the head and neck, apparent blindness, walking in circles and more.

The brain worm P. tenuis is the culprit to cause this sickness. The original name for this sickness was meningeal worm because of the location of the worm in the host which is usually the membranes of the brain and the spinal column. 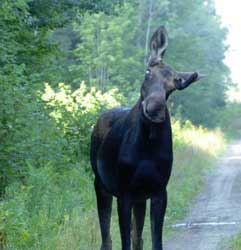 This young bull moose is clearly showing signs of being infected with the brain worm P. tenuis

The problem is, the moose brain worm can kill moose* resulting in a decline of the population. The brain worm was first recognized as a problem to moose populations in eastern North America during the mid 19th century. However this has not been proven to be the root cause (Whitlaw and Lankester 1994), ongoing analysis and study is continuing.

The brain worm does not kill many moose itself (studies are indicating this), however; being infected by brainworm predisposes moose to other types of mortality*. Thus many early researchers believed it was the infection of P. tenuis that killed the moose.

Where is the Parisite P. tenuis Found?

To-date the parasite is only found in the east but it is not known where the boundary is across the continent. Just how far west can this parasite be found?

In Manitoba white-tail deer have be found with the parasite as have deer in central Oklahoma and eastern Texas.

Just how will you know if a moose has a case of brain worm?

One or more of the following symptoms may be present:

How do moose get the brain worm if deer are the hosts?

The brain worm is passed from deer as larvae along with their feces. The larvae then infect ground snails, slugs and other gastropods.

It is through the ingestion of the moose browse where snails and slugs will be consumed.

It remains unknown as to how many brain worms or developing larvae cause debilitating effects on moose.

Moose Dying in the Southeast

Could the demise of moose populations in the Southeast be a direct result of moose brain worm?

I suspect so. Why?

White-tail deer populations in the southeast are at an all time high. With the White-tail deer being the primary host to the brain worm P. tenuis it stands to reason that the moose population will decline.

Of course more study of the brain worm would have to happen, that means governments are going to have to cough up some big dollars to allow biologists to come to some sort of conclusion.

Are the brain worms dangerous to humans?

The worms and larvae of brain worm are only found in the brain tissues, spinal cord, bloodstream and stomach contents. As long as you are cooking moosemeat and not consuming any of the brain, spinal cord or stomach there should be no danger to humans.