Well one day in September I was out hunting just to the east of my camp... and this cow moose had been hanging around my camp with her calf... and I had been hearing wolf's at night.

So in the morning I took my Honda ATV and went through the swamp to the cut line that run's east and west. 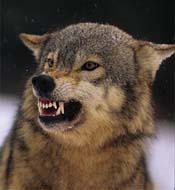 I stopped the bike and decided to walk in to the next grassy Field as I walked for 10 min's I had come to this field where I could hear the wolves had been howling.

You could hear that cow moose bellowing for her calf, as the wolves had been after it. So I came to another cut line that ran north and south. I turned and went south on it for one hundred yards and stopped.

There to my amazement was a wolf standing broad side to me. He was a charcoal dull black, howling away so I brought the gun up to shoot and I pulled the trigger but the safety was on.

Anyway at that point I had changed my mind about shooting him so I had put the gun down and just watched him howling and as I looked down the cut line about 100 yards here comes another wolf exactly looking just like the first one and he's coming straight at me.

He ran 50 yards at me then stopped looked at me again and then he started a dead run at me like a wolf attack.

So I said to myself, "Things here just changed!"

So up come the .270 Weatherby magnum with a 130 grain pointed soft point. At that point I fired hitting him just slightly off center to the left shoulder, pow... a hit and that wolf went about 10 feet straight up just a yippen off in to the bush it went, with its buddy right behind it.

So I stayed where I was and just listened well you could hear that wolf in bush just a yipping and you could hear about another 20 or so other wolves in the bush talking to each other then all at once there was one last big yip and it was all over for that wolf as them other wolves attacked and killed that wounded wolf.

I got my bun's the hell out of there I just thought you know I'm next. I never did go back in to that spot for a long time.

You sometimes just do not know how close you are to trouble. Like in my previous story if you guys have a Remington model 700, clean out the inside of your bolt... it gathers dirt and will stop your firing pin from hitting the primers hard enough.


Dan, These wolf encounters seem to be happening more and more across North America. Wolves are increasingly becoming a threat to outdoorsmen. Thanks for sharing your story... I am glad for your sake that you we able to avert a wolf attack.