We set up a trail camera overlooking our gut pile from a moose we shot, wondering just what kind of predators might feast on the remains. Little did we know what we would find when we returned five days later when we went in to pick it up a few days before we broke camp. 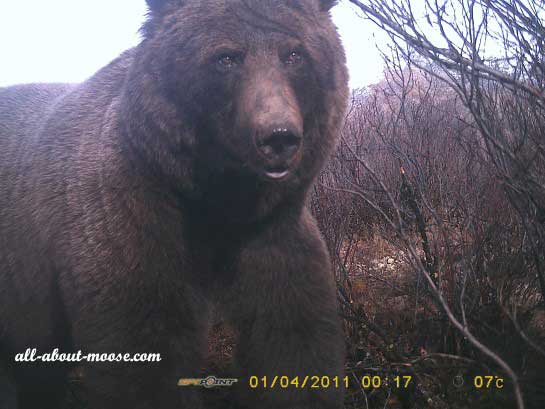 We were moose hunting in the Yukon, where they say there are more bears than there are people. I believe it too! Although we didn't see any bears the sign was there: overturned logs, huge holes dug where they were looking for underground varmints and scat... everywhere we tuned there was scat.

The day we picked up the camera it was decided to pick it up on the way back to camp for lunch.
Kirk was the one to pick it up, and as he approached the site in the 6 foot high buck brush he spoke out loud, "Hello bear, I'm coming over there. Are you there bear?"

Kirk likes to be cautious in bear country!

You cannot be too Cautious in Yukon Grizzly Country

Rightly so too, when Kirk rounded the last bush where he could see the site, what he saw was what looked like a rototiller had been through. The moss and the bushes for a 25 foot circle had been completely turned over and flattened. There was no sign of any moose remains. Kirk's hair stood up on the back of his neck, "only a grizzly would do this" he thought. But where was the bear now?

A quick scan and no bear in sight, Kirk grabbed the camera and made his way back to the truck. He handed me the camera at lunch time saying, I think you have some pictures on here.

I quickly loaded the SD card into my viewer and what I found astonished me. Well over 1400 pictures over 3 1/2 days the last being only a few hours before Kirk picked up the camera. 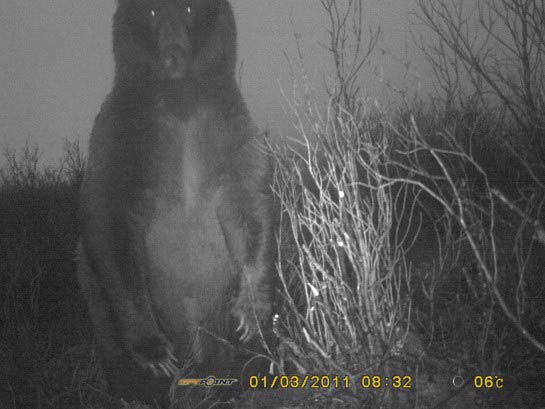 A Yukon Grizzly Bear shows off his manicure! You don't want to tangle with this guy!

I was very surprised the bear did not eat my camera. I have close-ups of his nose, and his posterior.

The kill site was located only a few kilometers from the cabin in which we were sleeping, the cabin which only had plastic replacing several windows because a grizzly broke in the spring before. I hadn't been all that at ease anyway, but now I questioned if I would get any sleep at all. A hungry bear, not far from camp, and we had three moose hanging on our game pole. Yikes!

We heard form the game warden a few days after we left that a HUGE grizzly had been spotted only 30 meters or so from the cabin. Sure glad we were already gone!

We are now offering customized moose shape keychains. Put your favourite caliber, rifle make or saying on it. Add text to both sides!
It's also a bottle opener!