If You Go Out Into the Woods Today...
Be Aware of a Black Bear with Four Cubs

A black bear with four cubs is an unusual sighting! These were all healthy bears, I surmised the cubs were one and a half years old judging by their size.

I had been out moose hunting in my favorite area, hiking up and down seismic roads, game trails and along the edges of meadows. It was a beautiful day to be out. It had started out to be a cold morning, frost had covered everything out in the open. So much frost in fact if you didn't know better you would have sworn it had snowed during the night.

As the morning worn on the sun rose and the frost gave way to the dew, the forest began to awaken. Squirrels chattered in the distance and ravens called out to all their friends to determine if any had found food. Did you ever notice that about ravens? If one finds food he'll make so much noise that all his buddies will come racing to share. 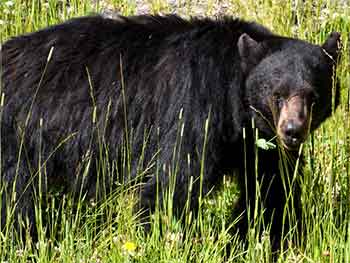 I had been out moose hunting for about four hours and was making my way back to my vehicle when this chance encounter occurred.

I first spotted movement out of the corner of my eye; I questioned at first if it was just wishful thinking or did I see something black move?

Of course because I was moose hunting the first thing that comes to mind is a Big Bull Moose. I stopped dead in my tracks and quickly trained my binoculars on the spot.

It wasn't long before I could see it was a black bear. Oh... there is more than one, now two... three? My gosh, there are five of them. I am just slightly outnumbered! I have seen sow bears with multiple cubs but never a black bear with four cubs!

Looking ahead in the direction the group is following I could see they were following the same seismic line I was on... we were on a collision course.

I have had many encounters with black bears... starting as a young teenager I recall chasing the bears up trees so I could deliver the newspapers in the rural town where I lived. Make lots of noise, don’t get between a sow and her cubs and keep your distance are just a few of the safety rules when dealing with bears. Now don't get me wrong I have a healthy respect for black bears, I just know that they are more afraid of me than I am of them. This may be different though. A sow with cubs must always be respected... now here a black bear with four cubs. I was a little intimidated to say the least.

I wanted to keep going in the direction I was traveling, so what to do? A mother bear of any kind is not something to mess with. I didn't want to surprise them but I did want them to know I was there! How could I make myself known to them without startling or surprising them, and do so at a safe distance.

I moved forward on the road to a spot where I had a good vantage point of the advancing black bear with four cubs.

I stood very visible in the middle of the road as they approached, I reached down to touch my bear spray. I wanted to be sure that when the bears spotted me they would immediately identify me as human.

The black bear with four cubs continued their approach. As the distance closed to about 75 yards or so, suddenly one of them spotted me. They all stopped in their tracks. I am sure they were whispering among themselves... "What's that on the road, not deer, not rabbit... yikes! It's human!”

As if on cue they all turned simultaneously and ran into the forest.

Well, that did it... they were no longer on my road of travel. But, where exactly are they? Bears are predators, and you have to respect that. I wanted to continue on my way but I only know those bears left the road. I don't know how far they went. What to do?

I waited a short time; I’m not sure... maybe five minutes. Needles to say I was a little nervous. It seems as though the road got awfully narrow suddenly and the bushes alongside impossibly thick to see through. I walked carefully down the road, scanning as far into the bushes as I could, prepared, yet nervous. As I walked I reached down and felt the can of bear spray... yes it was right there!

Needless to say I did not see the bears again; I think I was just as happy to not see them too!

A healthy respect for bears is very important. You should never approach a bear, nor try to feed them. As I said before, bears are predators and need to be treated as such.

This spring I witnessed (caught again without a camera) a black bear carrying a deer in its mouth. The deer quite alive was screaming (it sounded like an eagle) as it was carried away by this bear. The bear and deer were only visible for a moment, really just long enough for me to focus my binoculars on them before they disappeared over the hill. A few hours later I looked around the area where the bear had taken the deer.

Through the tracks I was able to put together the ambush and then the attack, Mother Nature performing her stuff. I was in awe of witnessing such a sight, probably one I will never see again.

Consider bears for what they are, dangerous carnivores... keep your wits about you when traveling in bear country. If you have any luck you might be fortunate to see a black bear with four cubs... hopefully you’ll have your camera and snap a photo or two.

Here is an article on bear safety, it's worth a read.

Top of the Black Bear with Four Cubs