by Marv Dean
(Kamloops, BC)

2007 was a good year for British Columbia Trophy Mule Deer Hunting!
Part 1
Jump to Part Two...
I live in the Interior of British Columbia, it's a Haven for Mule Deer, Moose and all different kinds of Wildlife, I love it! I live at a Lake just East of Kamloops, I'm on the north side, sun shine all year round, and we can Quad or ride our Snow machines right from the house into thousands of Acres of Public Land!

In the 2007 Season I put lots of time in, both Deer Hunting and searching for the Elusive Immature Bull Moose! 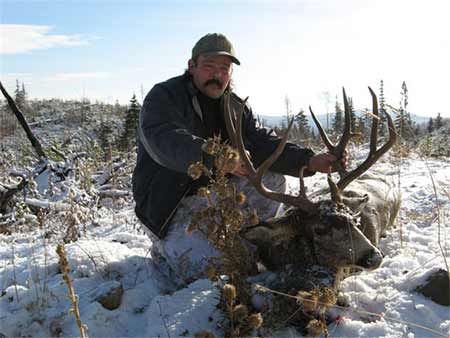 Trophy Mule Deer hunting turned out a lot better! I'm lucky enough that after work every night, I can come home, grab a Thermos of coffee and a sandwich jump on the Quad and off I go!

In 5 minutes I'm in some of the best hunting areas around here, and I take full advantage of it!

I love to take pictures of Animals, watch where and how they feed and live etc. When I do see a decent Buck, I'm on the phone to my Son Troy or Daughter Tracy and her Husband Ash, who both love the sport. I can't leave out Kato or Ali, my Grandkids, there 2 out of 9!!! They come up to the lake with their parents and love to come out hunting also, it's great!

Back to Deer Hunting... I'd seen lots of Bucks, some very nice 4 points, but just not what I wanted, so I waited for the Big One!

It's very hard to sit for hours watching deer; and a big Mulie Buck walks out, I glass it thinking "Is this the one?" It's a 4 point, real high tines, nice bases, but Dam, very little depth to the forks, sure wish one of the Kids were here!!!

This went on the whole season! I turned down around 25 Trophy Mule Deer Bucks, some it was very hard to do, as I watched them walk away. I thought to myself, Marv, you're going crazy in your old age!!!

On October 27th my son Troy was up hunting with me, we both had Quads and left before day light to one of our favorite spots, Troy decided to stick around an area where we had seen some real good sign early and I continued along the trail to spot about 4 miles away.

I seen some does, a few bucks but nothing worth taking, so there I was just pouring a coffee and had my Sandwich out when the radio started cracking! Buck Down Trophy Mule Deer Buck Down!!!

There was one very excited guy on the other radio! "Where are you?" "Up the Skidder Trail hill" was the reply, well my sandwich went in my pocket, I gulped down as much hot coffee as possible and I back tracked to where Troy was.

Up the steep hill I went, and I mean steep, you really have to lean forward to keep the Quad from going over backwards and making a real mess of you and the Quad!

When I got over the top, there in the distance was my son, Gun high in the air in a Victory salute to his Dad!!!

What a nice 4 Point Trophy Mule Deer Buck he had taken! A beautiful November 11th Buck! As we shook hands and the back slaps were on going, I walked closer to the Buck, now this was an older Mulie Buck, in full Rut!

I stopped, looked at Troy and said" Son, you'll be cleaning this one yourself!" Man was it high!

If you've ever smelt a trophy mule deer buck in full Rut you know what I mean, Troy laughed and said" Dad, as soon as I walked up to it I could smell him, and the first thing that crossed my mind was "I'll bet Dad is 10 feet away from me when the cleaning starts"!!! He was right, I stayed back, I told him I'd be the Photographer on this one!!!
I helped Troy load the Buck on the Front rack of the Quad, I had mentioned maybe we should drag the buck to the bottom of the skidder trail, then load it up but nobody listens to us old guys so on the front rack we tied him!

The ride down that hill took 10 years off my life!

The rear wheels of Troy's bike came off the ground, he was leaning backwards as much as possible and the bike was still going to flip forward down the hill!!! Thank God Troy's a big Boy, he weighs in at 225, so he kept the Quad on its wheels to the bottom!

I just shook my head while I followed him down to the flat area at the bottom, he looked at me and said "Told you it was a piece of cake"!!!

I could see he was a bit excited with the hair rising ride down too!!! 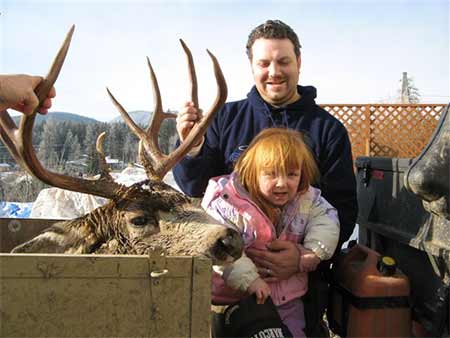 I was out every chance I got. I seen some nice 4 points, but nothing big, there were real fine bucks, don't get me wrong, but just not what I wanted to punch my tag on!

It was getting real cold, minus 10 to 15 at the house, and I'm hunting at least a thousand feet higher, there was a few times I stopped the Quad and asked myself, " Is a Buck really worth all this?" The answer was always the same "Yes it is"!

The days pasted, the season was starting to wind down, and I didn't have my British Columbia trophy mule deer buck. The thought always goes through your mind" Am I crazy, I've pasted up so many great looking bucks, am I going to get a bigger one"???

The dawn of Nov.24 was just breaking, and it found me way above a Lake on a snowed in Logging road, it's one of the higher points above here, and man was it cold! I was dressed very well, Big Sorel boots with big felt packs inside, an electric vest, insulated pants and jacket, the whole nine yards, and I was still freezing fast!

I had hiked around lower down the mountain, I had seen lots of bucks and does in the area darn near every time I'd been there, but I saw a couple lone does, but no trophy mule deer bucks.

Back on the Quad, plug my vest in and up the road I drove. Holy Sh**!!! I looked up to my right, and there 3/4's the way up the open side hill was a huge, heavy Mule Deer Buck!

I grabbed my Bino's, is this the one I asked myself?

He was big, huge bases, high tines... everything! He had his nose down, slowly walking on an angle up the side hill.

Off the Quad, gun on my back loaded I kneel down and glassed him again, Son of A Gun, he was the biggest trophy mule deer buck I had seen all year, BUT, his front tines really lacked any depth! I could have cried!

I was so cold, my hands were on fire it was so dam cold, I could end this torture here and now I though, just aim and squeeze you fool!