Calling bull moose in for a close shot. Archery hunting requires the game at close range and offering the correct shot opportunity. Sometimes or should I say often, things do not go according to plan as you will see from what happened to me.

Hoping the wolves had moved on I decided to return to the same lake as the previous morning. Arriving at first light, I walked across the cut block being careful to avoid making human noises while I walked. Once I cleared the cut block I settled into the trees just along the edge of the cut block. At this point I was situated about 300 yards from the lake.

After waiting about 10 minutes for things to settle down, I began a series of cow moose calls while calling bull moose. Softly at first in case a bull moose was nearby. I called and waited about 10 minutes before repeating the cycle. I did this for about a half an hour. Once, I thought I heard a bull grunt over towards the lake... but I could not be sure. 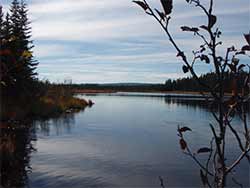 This is the lake shore where I was moose hunting in 2011.

I decided to make my move to the lake, so... I quietly made my way through the remaining cut block and passed through the narrow strip of trees that separated the cut block from the lake as I moved towards the water's edge.

I wanted to get completely setup before I started calling bull moose. After removing my pack I set the camcorder on the tripod, hung my bow a branch with an arrow on the whisker biscuit arrow rest.

I use and recommend the whisker biscuit arrow rest.

Once comfortable, I began my series of cow moose calls. I began calling bull moose. OH MY... the unmistakeable grunt of a bull echoed from across the lake. My heart skipped a beat!

Somewhere on the hill, along the far side of the lake a bull moose was grunting and because the timber is very thick over there, I was unable to determine just how far he was away.

I would cow moose call and he would answer with a grunt... after what seemed like an eternity I could tell he was getting closer. I reached down to start the video camera, and just after I started recording the bull stepped out into the open on the edge of the lake. Although you cannot see him on the video you can hear me whisper “Here he comes”.

The lakes edge curved with a small bay that was out of my line of sight. I concluded that if the bull walks the lake shore he will walk right in front of me. Camera set, and recording... this is going to be cool!

The bull was cooperating just fine, I would call, he would grunt in answer and keep walking. I watched until he disappeared into the bay... but I could hear him coming... slosh, slosh, slosh through the water. Out of sight but still coming, oh how my heart was pounding, I thought for sure the bull would hear it.

Calling bull moose: Everything was going to plan... until the unexpected happened!

At the last minute instead of following the lake shore right past me, he headed inland and came in behind me. I heard him coming through the trees, thrashing his antlers as he walked... I caught a glimpse of antler. I made a quick move. No time to adjust the camera. He walked out in front of me and stepped into a clear shooting lane. Perfect, he was close too (I later paced it to 13 yards)... but at the last second he turned to face almost directly away from me offering no shot.

Moving quietly and stealthily I stepped forward and to my right to increase the angle, one step, not enough, two steps... still not quite... just one more... BUSTED!!!!

He ran, circling back to safety from where he had just come, I cow called and he stopped broadside. Shielded by some brush I used my range finder to get the yardage, it showed 45 yards. "I can make that shot easily" I thought to myself. But is the range finder reporting the moose distance or the brush out in front? I could not take that chance. A brief moment later and he was gone.

I stood, momentarily paralyzed, pondering the events that had just unfolded.

It always amazes me at how quietly an animal as large as a moose can travel through the thick bush. I never heard a sound as he made his escape.

I captured some of the sound from the bull as he came in and my reaction afterwards. You can watch and listen by following this link. Moose Coming In

I stayed in the area for at least another hour calling bull moose, trying in vain to woo him back. No such luck.

Have you ever had a similar experience? Tell us about it.

Return to the Moose Hunt 2011 Page