MOOSE HUNTING - Friends Can Help!
On another moose hunting trip my wife Susan and I were driving back toward home, when, as we drove past a couple very small lakes she says "There are three moose standing in the lake!"  I stopped the vehicle, and then backed up after pulling over on the side of the Alaska highway. 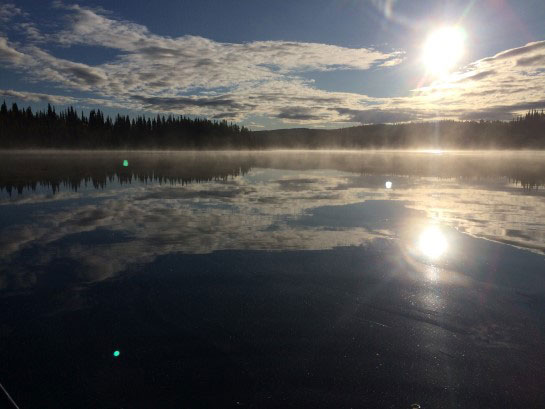 Sorry, no moose in this lake. But it is beautiful, right?

I quickly exited the truck and loaded my rifle; I had my 7mm Husqvarna rifle with me and quietly walked up a bank off the highway. I asked Susan just to stand in the open, to distract the moose. While the moose were looking at her, I took a shot at the smallest of the three moose and down he went in the water. So there lies our bull, near the far side of the lake in a couple feet of water.

Not having our boat with us, I cut my moose tag and put a note on a bush saying we had gone to town 70 kilometers to get our canoe. I put my name on the note and knew if the game warden came along, at least he would know who shot the moose and we would be back.

Susan and I paddled our canoe over to the bull moose and once there she climbed out of the canoe. I asked her to tie the rope around the antlers as moose float well with lungs and inners still in them. We got the moose turned and she would walk a short distance along the shore and pull the moose to the canoe.
As we worked our way along the shoreline, we heard a moose grunt in the distance. Not one too miss a chance at practising my moose calling, well, stupid me I grunted back. Well then, all hell broke loose!
Within moments, standing there just above us on the shore was this huge Yukon Alaskan bull moose, and he was mad as heck! His ears were laid right back along his neck and he was fixing for a fight! From where I was sitting in the canoe all I could reach were a few small driftwood sticks which I threw at the moose. As though it could understand me, I was yelling "Just stay right there"! I did not like the prospect of a large moose in the canoe with us. He finally spooked and ran off, I told Susan, "We do not need two bulls today!"

At the time our vehicle was Toyota Tacoma and complete with a camper, so we decided to drive home to get some supper supplies. I felt the cut tag and note would at least confirm were not abandoning the moose. I was able to back the truck and camper down a bit of side road , down to close to the pond where Susan waded out hooked a rope around the hind legs of the moose. Once we attached the rope to the truck we pulled the moose out and onto the side road. I told Susan we better be ready to stay the night as I wanted to take care of the moose and figured it would be dark by the time we got finished.

Friends Show Up and an Opportune Time!

We did have our two ATV's we so got very close with one of them. I cut the moose open to get ready to get the stomach contents out. I had only been at work for about 15 minutes when I heard a vehicle pull over, doors open and close then a voice, "Hey, what you doing?"
It was a couple of First Nation friends we know that had stopped. When they saw us, one of them said "We will help you." I did not say nope to that offer! Those guys had the moose empty and into quarters in what seemed like record time. I asked the younger one if his partner would like the insides and he said yes. So Susan went to the camper and got four plastic grocery bags, we filled them with intestine which once cleaned and fried are a delicacy to first nations people. The younger of the two was named Peter and with everyone pitching in we all loaded the moose into the truck and said our goodbyes.

Two years later while on a caribou hunt very close to home, I was with my friend Kevin and saw a First Nation fellow and a women working on a bull caribou just off the Alaska highway. Kevin went down to see if we can help. I was thinking that we have enough rope to pull the whole caribou up to the road, so Kevin walked down to inquire. When he came back, he said, Peter wants to know if you want half a caribou? I said "We have not got one, so do you have to ask?" 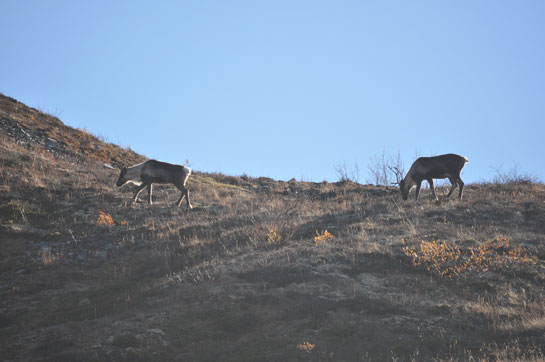 A couple caribou in the high altitude of the YT

I went down and Peter and I said our hello's.  He had recognized the truck so he knew who had stopped. The same thing happened the next season too! A car was on the side of the road, there was Peter again giving me the whole caribou this time! I laughed and told Peter I hope I see you out here again the next year too!  I have seen Peter every season since but he has not been looking after an animal each time, we are still friends for sure.

I have not found a way to call caribou with a vocal call but know of one First Nation lady who goes to her likely caribou spot, she sits in a chair reading a book and has a stick with flagging tape attached to it. Every so often she just waves the stick to make the tape flutter in the wind. The caribou see this and come to investigate as they are very inquisitive. This lady gets a caribou each year this way. We have a caribou hunt up here from August first to the end of October by vehicle or skidoo. It seems the caribou are spooked by the headlights shaking on the snowmobiles.

I know caribou hunters up north by Old Crow Yukon who black out the headlights of their skidoos as it spooks the caribou. One fellow also added a switch to be able to turn the lights on and off. The caribou up there are Barren Ground Caribou, and the limit for residents is two caribou per non first nation person.  I have a few stories of being given caribou up there but will save that for later. We lived there for almost four years. I still keep in contact with friends made up there, I learned how to cook caribou and moose ribs up there from my friend Esau.

This guest post is from our friend Robbie who lives in the Yukon Territories.