Learn How to Call Moose

Learn: how to call moose, when to call moose and where to call moose. Mastering these three important aspects of calling moose will increase your success rate.

Hunter or photographer success – isn’t that what we all want?

Having the knowledge to go out into the boreal forest, recognize good moose habitat, finding fresh moose sign: then putting it all together and call in a monster moose. 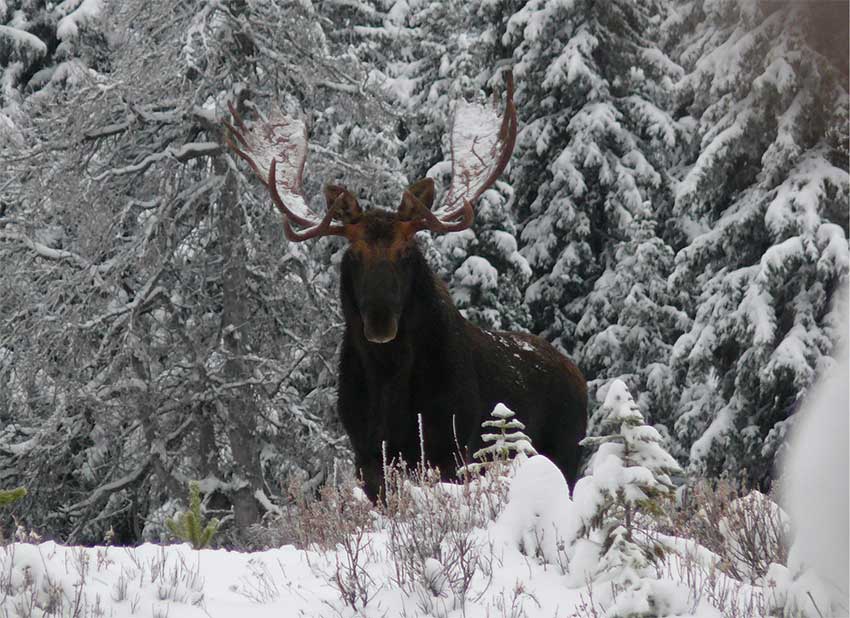 A curious bull stops to check us out!
Photo by Mike Hawkridge - Big Country Outfitters

Each season I head out on my annual moose hunt, armed with as much knowledge as I can jam into my head… knowing, that I can do everything just right and be successful in calling in a moose.

Learning how to call moose is not hard. You can use all types of moose calls to bring them in. The most popular are: birch bark horn (aka: birch bark moose call), reed style moose call, electronic moose call as well there are manufacturers that make a fiberglass horn.

There is more though, than just mastering the sounds that moose make.

It has happened to me during past seasons to call bull moose and have him respond in such a way that I was certain he would walk to within a few yards of where I was calling from.

It can be frustrating to the novice moose hunter who is learning how to call moose and have them hang up or not come any closer. Actually this can frustrate even the most seasoned hunter.

What do you do in a case like this?

Actually you have several options, depending upon the hunting gear you have with you and where you are set-up in relation to the location of the moose.

How to Call Moose? Calling moose is the ultimate contest for most hunters. Imagine... being capable of calling one of North America's largest game animals right to your feet. This takes some skill, some determination and a lot of guts! ;-) Those of you who have had a moose within feet of you I am sure would agree!

Calling moose is -- imitating their sounds and in doing so enticing them close enough for: a picture, a bow and arrow shot or a rifle shot.

What do you use to call moose?

When learning how to call moose it may be advisable to purchase a quality moose call, possibly one that comes with a CD or DVD for sounds and instruction.

The other option would be to use your own voice. Using your voice when learning how to call moose means you will need to learn to manipulate your vocal chords to mimic various moose calls. This is not hard to do, but some moose hunters find it too intimidating to try and then unfortunately just do not get the opportunities to have close encounters with moose.

REMEMBER – Rutting bull moose can be quite aggressive!

Do you carry a moose scapula? When learning how to call moose you will find a moose scapula, once cleaned and dried will sound exactly like a moose antler when rubbed on a dry tree or bush.
Imitating a bull moose by rubbing a dry tree will sound as though you are sending out challenging signals. Bulls that respond to these types of sounds will often come to you very quickly… make sure you are ready!

Did you know: The coloration on a moose antlers is a combination of dried blood and tree bark from the trees and shrubs they rub?

When to Call Moose

First off I can advise you to "save your breath" if there are wolves howling or have been howling in the hours prior to you wanting to call moose. Moose will not vocalize if there is threat of danger in the vicinity. You should move to a new area.

When should you call moose?
You should be calling moose before, during and after the rut.

What time of day should you call moose?
The best time of day to call moose is from before daybreak until mid morning, then again in mid afternoon until dark.

When is the rut? Generally speaking the rut will peak the first two weeks of October. You will have good calling opportunities for about two weeks before and after the rut. Before and after this time period the hunter is better advised to employ: spot and stalk, tracking or stand hunting.

I'm just learning to how call moose: When are the best times of day to call moose? I would suggest that from a half an hour before daybreak until mid-morning, then again mid-afternoon until dark. Don't be in a hurry to leave an area where you have been calling moose. A bull may hear you but be already bedded down. He may come to investigate in the afternoon during the afternoon feeding period.

Where you call moose is of course another important component of learning how to call moose. By "where" I mean your location in moose country; I am assuming you are already in an area where there is a moose population.

When setting up to call moose you must consider the habitat and weather. If it is warm the moose will be seeking out the thick and cool areas of the forest and will not come to your beck and call no matter how "sexy" you sound. You will have to go to them, or at least closer towards them.

"Moose Love the Meadows" everyone knows that!

Well contrary to popular believe, moose spend much more time in the forest than in the meadows. "Why do we always see moose in the meadows then?" Because they are quite visible there!

It is a fairly simple explanation; a large brown object in a sea of grass or huckleberry bushes is pretty easy to spot.

Studies have shown that moose prefer meadows that are less than 100 meters (300 feet) across for prime feeding areas. These types of moose habitat offer an easy and quick escape from danger once detected.

Moose are found more often in the meadows and swamps in the spring.

When setting up to call moose near meadows you should have good visibility, preferably in at least 180 degree field of view (360 degrees would be best). Bull moose will almost always try to approach a cow moose from the downwind side to scent her and find out just how close she is to her breeding cycle. The hunter must anticipate this and be prepared to move to prevent the moose from scent him.

A couple of seasons ago I missed a chance a good bull as he was approaching. I wrongly assumed he would turn towards my location before he crossed my downwind scent.

I had actually considered moving to cut him off, but decided instead to hold my spot. The next thing I knew I could hear that bull grunting his way away from me, back towards where he had come from.

Speaking about where the moose come from, retreating big game will invariably return toward the area from where they just came.

Safety! The area they just left was safe, so they will assume the area is still safe to return to.

Because rutting moose can be very aggressive it is advisable to call from a different location than that of where you lie in wait. Move 50 or so yards in various directions when making your calling sequences, then return to your waiting spot.

Moose have keen hearing, even from great distances. They have the ability to zero in on sounds and find the location from where the sounds originated with pin-point accuracy.

But... don't be afraid to make any noise when learning how to call moose. Moose are large animals; they make some noise when they move. If you are pretending to be a moose... then it would be appropriate that you make some moose noises!

Finally… when learning how to call moose; keep in mind that once you get a moose responding, and it is obvious that he is headed your way. Reduce the number of times you call and the frequency with which you call. I personally don't like to give any more calls once the bull moose are within 100 meters and are still approaching. I don't necessarily want to give up my exact location.

Top of How to Call Moose

Return to the Moose Calling Page

Return to the Moose Calls Page