Hunting Moose from a Canoe

Hunting Moose from a Canoe - by Cal

Though it was long ago I can still remember it like it was yesterday, the small event that would come to shape my life.
It was on a canoe trip as a child during my brief stint as a Boy Scout, I steered our canoe off the main flow and into a side channel hoping to find a bit of fast chop to paddle through. 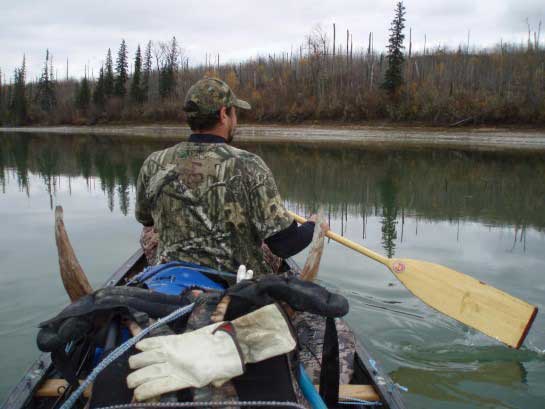 Hunting Moose from a Canoe

Suddenly a huge mule deer buck burst off of the island and charged across the channel, so close to the canoe that it actually splashed my frightened bowman.

I didn't know anyone who actually hunted at that point in my life, but it was something I'd always dreamed of... and this, I decided, must surely be a great way to go about hunting.

That memory stuck with me long into adulthood and when I finally did start hunting I was still convinced that using a canoe to hunt the wilderness was something that I had to try.

Nobody else I knew that hunted felt the same way however, most thought it was a crazy idea, some thought it was too dangerous, everyone told me it would never work, thus my idea got shelved for many years.

The final push came one year when my uncle drove 15 hours from Vancouver to northern Alberta to join me on a moose hunt. I had a 4x4 with a winch and a couple of ATV's, my uncle brought his camper van, we both anticipated a grand adventure.

On my first hunt, I paddled down a river for six hours and then fought for several days to get a moose back up it... I strongly discourage trying this.

As it turned out the hunt was a bust, the weather was hot, the game was scarce, worst of all one of the ATV's developed mechanical problems and our ability to get into many of the better spots I had scouted was severely crippled. I decided right then and there that I would never leave the outcome of what I had expected to be the greatest week of the year at the mercy of mechanical failure.
The next year was my first time hunting moose from a canoe, which was an important learning experience in how NOT to conduct a canoe hunt from a canoe.

Despite the steep learning curve the experience was intoxicating. I've been doing canoe hunts ever since, for over 10 years now, and here is much of what I've learned. 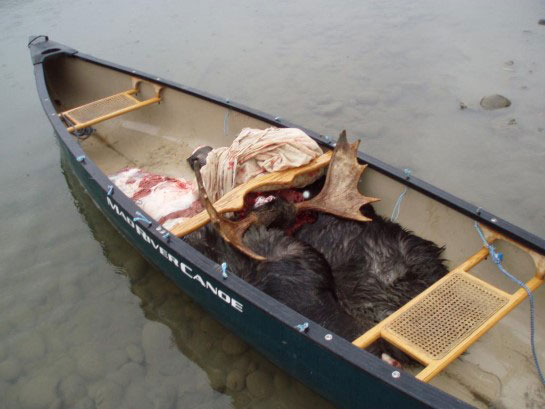 Hunting Moose from a Canoe
The Hunt

There are a couple of ways to paddle your camp into the wilderness.
Over the years, I've paddled down the remote shores of lakes, or dragged my canoe up rivers and then canoed back down.

On my first hunt, I paddled down a river for six hours and then fought for several days to get a moose back up it... I strongly discourage trying this.

By far my favorite way is to paddle down a stretch of river from a put in point, to a take-out point.  This usually necessitates using two vehicles that can haul a canoe and often requires a significant amount of time in getting both vehicles into position and retrieving them afterwards, but it is the best way to get a good distance back into remote wilderness and bring your moose back out to civilization.

The first thing that must be considered when doing such a canoe hunt is the river one intends to run.

Many rivers run very low in the fall and may not have enough water to get a loaded canoe down by mid-October.

At the other end of spectrum, a river with lots of water will often have more hunters in motorized boats to compete with. If a tag must be drawn one needs to find a stretch of river where most of its length runs through or along a single zone where you can draw a tag.

Some stretches are just plain unsuitable for other reasons. I know a stretch of river that has good moose and elk populations, unfortunately at low water one must drag the canoe over shallow bars every kilometer or so, but when the water is higher there is about a 4 kilometer stretch that is way too rough to run safely... about 3 days into the trip.

Getting an animal out of such an area is obviously going to be very difficult under any conditions.

Back in the early days of hunting moose from a canoe, I often made the mistake of trying to cover too much distance.

As a result, we would spend a lot of time traveling rather than hunting. I've come to feel that to properly hunt a stretch of river, in a week to ten days one should only attempt to do a stretch of river that can be paddled in 4 days’ maximum.

More often than not, especially on a river I am familiar with, I will shave this down significantly more.
This fall I spent a total of 9 days hunting moose from a canoe on a stretch of river that I could have easily paddled in one day. The actual mileage may vary quite a bit, on a big river with good flow and few rapids I might be able to cover around 200 km in 4 days, on a shallow rock studded river it might be less than half of that. 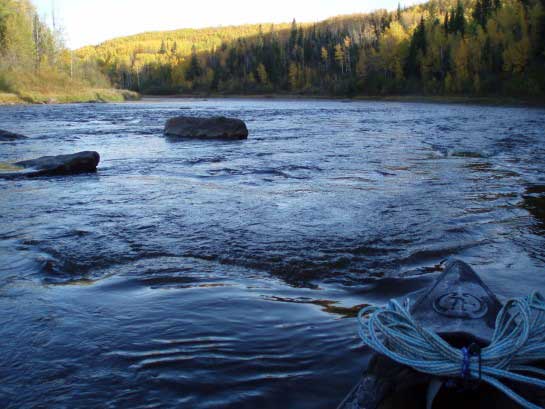 Watch for submerged rocks and sweepers when hunting moose from a canoe!

I used the term "properly hunt", many people think that hunting moose from a canoe consists of lazily floating down a river hoping to surprise game at the river's edge.

Back when I first started doing these hunts we sort of did this, we'd hunt the morning then break camp and paddle the afternoon. We'd make camp late afternoon and then hunt the evening.

We managed to kill animals hunting like this, but I no longer consider it a great strategy. We'd pass by good spots in the afternoon, and then end up hunting marginal spots simply because it was time to make camp. Even when we found a good spot, we often had to leave it too soon to keep up with our aggressive travel schedule.

Large amounts of time and effort that would have better been spent hunting was spent moving camp and paddling every day.

After enough years of hunting moose from a canoe, my ability to identify productive areas on a topographical map before I even paddle the river developed and my strategy changed completely. Now I pick 3-4 areas that I feel have a high potential to hold good numbers of animals. There may or may not be animals along the entire stretch of river but I know for sure that some, if not all of my areas, will hold animals.

If I concentrate my efforts in these spots I have a much greater chance of success than if I spread my efforts thin over many miles. If I find fresh sign at my first spot, I might spend the entire trip there. If a few hours of searching fails to turn up fresh sign or after hunting the area for a few days the sign goes cold, I then move downstream to my next area.


My last spot is my "Hail Mary Spot", it’s usually the last good area I have before the take-out and if I make it to this point and have not killed an animal I remain here and call until I run out of time.

So how do you identify key areas using a topographical map?

Well, years of practice and a trained eye can help, but about the best rule-of-thumb I can give you is this.
When hunting moose from a canoe, you are often looking for the topographical feature that is in short supply. I call this "the commodity approach" and it will work for hunting most big game species almost anywhere they are found.

For instance, when I hunt a river that runs through a high steep valley I'll be looking for low, flat willow bottoms along the river, long tapering slopes where animals can get in and out of the valley more easily, or flat shelves partway up the valley side.

When I hunt a river that has almost no valley, or a very wide one it’s the exact opposite, I'll be looking for ridges, hills, and high ground. Backwaters, islands, old dry river channels, and oxbow lakes are other good features... especially when they are in close proximity to other features that might attract animals.

Usually my key areas will have several good features in close proximity, as well as being difficult to access without a boat. In flat swampy country, an old oxbow lake separated from the main river by a pronounced ridge would definitely be a spot of interest. On the other hand, in steep country I would never pass up a long point, gently descending down to the river near a series of braided side channels and low islands.

› Hunting Moose from a Canoe
allaboutmoose