For some reason there is not more information around on hunting for late season moose. It's a more difficult hunt and very different in nature (than earlier periods) but the tags are often more easy to draw and the moose are usually less pressured. From my own observations here's what I've learned about hunting moose during the late season, but I'm always looking for more information. 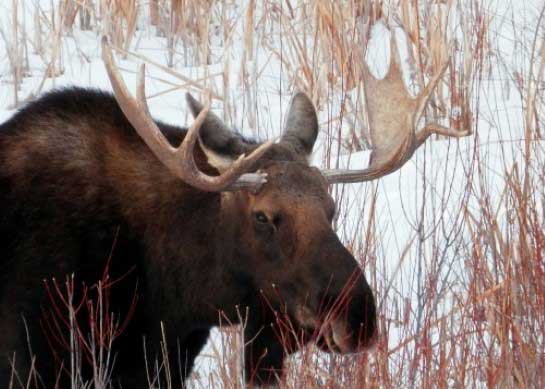 Bull moose during the late season

Moose often seem to abandon their rut and pre-rut habitat in favour of higher ground in my area. This probably doesn't so much apply to many high alpine areas, but especially in swampy areas any hill or ridge will become a high traffic area for moose. In my own experience moose have a way higher attraction to high ground year round than most people seem to think, but once the rut is over it becomes even more pronounced.

One can wait on cut blocks and hope for a moose to wander in, but my favourite way to hunt them is a tactic I call "run and gun".

Depending on the moose population I will either drive roads, run trails on an ATV, or simply hike as many miles as I can (by far my favourite) looking for tracks. When I find a track I follow it quickly until I can determine the animals sex, usually by finding where it has urinated. If its a cow I generally keep looking until I find a bull track and then track him down.

Moose are a fairly easy animal to track, way less difficult than a whitetail deer for instance. With their large size and black colour they are relatively easy to spot, and so long as they don't smell you they usually give you time to make a shot when you jump them. Even if they do bugger off one can often give them a half hour wait to settle down and catch up with them at least one more time.

Often a moose track of any sex will lead you to an area, usually a hill top, that is obviously a major feeding area. The willows and undergrowth will all be nipped off at almost the same height, almost like a lawnmower went over them at about 4 feet, but its actually years and years of moose browsing. Because the saplings have not been able to grow upwards they can take on a gnarled brushy look near their tops as they try to grow in other directions. 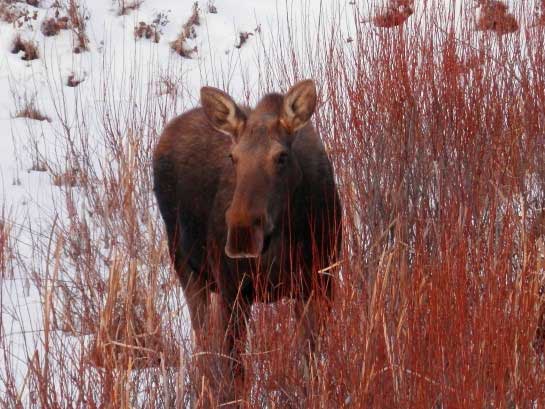 Lots of times you will find a huge tangle of tracks that looks like a whole herd of moose has been up there, but more likely is several moose browsing for a few days.

Unless you have a pretty distinctive track to follow here you will generally waste time wandering in circles and getting confused. In this case I still hunt the hill itself and if that doesn't turn up a bedded moose I circle the hill and pick up the tracks that are leaving.

Often one can make an educated guess as to where the feeding late season moose might be bedded and then hunt that area.

Finding your way back home after Hunting for Late Season Moose

Navigation is very important when hunting this way as its pretty easy to get disoriented while tracking. A GPS can be helpful in this regard but its no replacement for a compass, a GPS tracks your progress in relation to several satellites. It needs movement to give you accurate readings, and generally the slower you move the more trouble it had tracking you. In dense bush one is moving pretty slow, and it can sometimes take 20-30 yards for the GPS to realize you are going the wrong way. I once zig-zagged a distance of several kilometers to cover about one kilometer of distance because I left my compass in my truck.

I generally carry two compasses so I can compare readings if I start second guessing ones accuracy, one is pined on my coat for easy checking and the other rides in my pocket.

You need to keep track of how the trails and roads run, and take readings BEFORE you step into the bush. Determine a sure-fire escape route before you go in and then keep an eye on your direction while you wander. For instance, if I have a pipeline that runs north west for 20 miles and I am hunting east of it I will know that if I get turned around all I need to do is go south west and I will eventually find the pipeline.

I can't stress the importance of checking this out before you get lost.

I once walked off a road that I assumed ran east to west, onto a trail that I assumed ran north to south... in reality the road was running north east and the trail ran south east while gradually making a bend to run straight east... after hunting south west for most of the day it took me a long time to figure out why simply heading east didn't return me to the trail, luckily I had my GPS to get me back to the road... always take a reading BEFORE you leave the trail.