Using a Montana Moose Decoy II just might make difference between a successful hunt and one of... well, "we saw a beautiful bull moose, but he hung up on the other side of the clearing and would not come any closer".

It does to me, and countless other moose hunters that I have talked to.

Last season I had a the pleasure of calling in a 50" + bull moose to about 200 yards. He stopped, stood and studied the area where he knew he should have been able to see a cow moose.

Can a Montana Moose Decoy Make a difference!

I had been calling like a cow moose in estrus from the same spot for a couple of hours.

=========
Did you know that bull moose have the uncanny ability to zero in, just like radar onto a sound? Those huge antlers of theirs help to guide the sound right into their ears.

After studying the area for a while that 50 inch bull just turned and walked back into the bush. No amount of coaxing was going to change his mind after that.

This bull had come from some distance away, I knew this because I could hear him grunting and thrashing the bush as he approached. He was loudly announcing his presence, which a bull will do for two reasons.

Let me tell you, that hearing a love sick bull moose crashing his way through the timber trying to get to his potential lover is very, very exciting.

I was on an archery moose hunt and I was hunting alone. I was set up on the edge of a meadow that was ringed with willow and poplar trees. Lots of shelter, food and the safety of a lake nearby. Everything was perfect.

I don't know what happened this season, but I have checked with several of my moose guide contacts and they all had some difficulty last year getting the bulls to show themselves. We all had a lot of "conversations" with bull moose and the bulls were coming ... then for no apparent reason would hang up, or stop short of showing themselves. 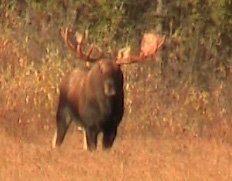 This bull came from a long ways
in answer to my cow calling.

During the 2012 moose season I saw eleven bull moose. I had conversations with cows and bulls almost every day for eight days of the archery season. Several bulls came in very close but not quite close enough for a clear shot, I am convinced that my season would have turned out very different last season had I taken a moose decoy along with me.

I had been debating getting a Montana Moose Decoy for some time, I don't know why it's taken me so long to getting around to getting one.

I finally did it and I expect good results this year! I'll have a Montana Moose Decoy II set up to draw that big bull in within bow range.

How Will a Decoy Benefit You

A moose decoy will aid a hunter by offering a distraction from himself and offering a mock moose for the bull to see, rather than a bull having to rely totally on sound, now you can offer something for him to look at too.
A sexy cow moose decoy made by Montana Decoys, who by the way make a number of decoys for various species.

For more information about Montana Decoys and their products, visit their website: http://www.montanadecoy.com/

Moose Hunting Tip:
When hunting moose on the ground, try to set your decoy behind and to the side of the shooter. If you have a partner who is doing the calling. Set him up behind the decoy. You want the bulls to focus on the decoy and not the hunter.

About The Montana Moose Decoy

The decoy has a photo realistic picture printed on the cover. The whole thing is over a steel ring that with a simple twist collapses up and will fit into a large vest pocket or easily be tied to your pack.

There is another brand of moose decoy on the market HD Extreme Cow Moose Decoy, it is printed on hard plastic that rolls up into a large tube. When it is cold it is very difficult to get the decoy to lay flat. Not only that, that particular decoy is heavy and cumbersome.  Read on to hear our views...

This is why I think the Montana Moose Decoy will be the one to take along on your next moose hunt. It's ease of use and portability means you are more likely to use it and increase your moose hunting success.

Our moose season is just around the corner and you can bet your last dollar that I'll have my Montana Moose decoy with me. I'll be reporting back right here with stories and pictures too.

Well, we just returned from our 2013 moose hunting trip and we have the following to report to you.

We tried out two moose decoys this season.

The Montana decoy was easy to deploy, set up and carry. I highly recommend the Montana Moose decoy. We were so impressed with the decoy that every hunter in our group will carry and make use of these easy-to-use-moose-decoys next moose hunting season.

We have posted some video footage of the two decoys so you will see for yourself how easy the Montana Decoy is to use and how cumbersome the Extreme Dimension one is.

Want to see for yourself? Watch our video and see the two moose decoys reviewed.

The Extreme Dimension Phantom HD Cow Moose Decoy on the other hand... DON'T WASTE YOUR MONEY! This decoy is hard to handle, it makes too much noise and it doesn't stand up straight.