Moose Shepherds Pie. This is a great recipe for the husbands to make! If I can do it, so can yours!
Shepherds pie is often made with beef or lamb and is a well known meal, here I made it with ground moose meat.

My wife was busy doing homework for the college program she is taking, so I was tasked with coming up with dinner for tonight. 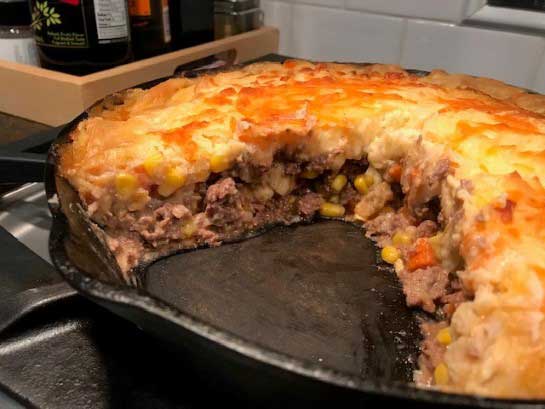 Comfort food comes to mind when I think about Shepherds Pie and with a freezer full of moose meat it didn't take me long to come up with an idea.

I decided that Moose Shepherds Pie was going to fill the ticket!

It's definitely not a difficult dinner to put together and it always tastes awesome.
I thought I should share my recipe with you, so here goes!

What do you need to put it together?

What do you need to do with all of this stuff in order to make Moose Shepherds Pie?

In a 12 inch cast iron skillet I fried up the bacon. Then I removed the bacon and placed it on a paper towel to cool. While that was happening, I added the ground moose meat to the hot bacon fat in the skillet and broke it up and browned the moose meat. Once browned, I ate the piece of bacon!

Haha, you thought I was going to add it to the recipe, didn't you! Well I could have... but I ate it! LOL

Seriously, (I did eat the bacon) but then I sprinkled the flour onto the meat and mixed it into the juices.

Then I added the drained corn, carrots, cauliflower, broth and salt and simmered the whole mixture until it thickened.

While this was simmering, and after draining the potatoes, I mashed them (while adding the butter, almond milk and 3/4 of the grated cheese). 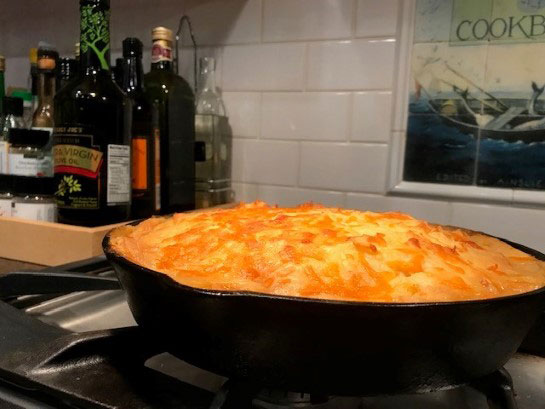 The moose meat shepherds pie, just out of the oven.

Once I figured the meat mixture had thickened enough, I flattened it out (kind of pressed it down smooth) and then dumped the mashed potatoes on top and spread them out. Kind of like spreading icing on a cake! (Not like I have ever done that!)

Top off the potatoes with the balance of the grated cheese and bake in the oven at 350 degrees until the top is browning or the internal temperature is at least 165F.

I hope you enjoy it. Leave some comments below!