My Tribute to a Moose Hunter

Uncle Lyndy was a story teller and a moose hunter. He could make a simple trip to the corner store sound as though it were an adventure. Through imagination and the spoken word he could capture your attention and draw you into the story.

Uncle Lyndy loved to moose hunt and he loved to talk about his moose hunting trips. As a youngster I remember hearing the hunting stories he and my grandfather would tell. Uncle Lyndy would revel in the telling of his moose hunting forays to the Batnuni. He would relate how they would travel for days to reach their destination; pushing the car through mud holes and snow and I am sure that he mentioned it was uphill both ways. In those early days, the Fraser canyon was single lane and gravel, a treacherous journey by today's standards. 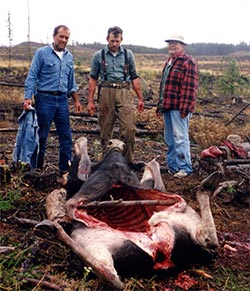 If that was not bad enough, the road from Quesnel was nothing more than a wagon trail, fraught with all types of hazards, a perilous journey that many even today would not attempt with a four wheel drive vehicle, let alone a car! For those of you who don't know, the trip from Vancouver to the Batnuni would take only about 10 hours today.

Imagine this if you will: All traveling was done by car; not today's cars equipped with front wheel drive and plush seats, but with a 57 Chevy. You remember those... they are collector cars today! Vinyl seats, no seat-belts, no CD players, heck there just was not much to those old cars. They would travel along rough and muddy roads only to be welcomed at a cabin that was over-run with rodents. There were no modern conveniences, no hotel beds, no flush toilets, just a room with a roof, a wood stove and a cot, with the mattress long since chewed by the menacing creatures of the night. This was real adventure.

The logistics of moose hunting in a car makes me wonder. With everything you need, piled in the trunk, enough clothing and food to last a week... Where did they put a moose when they got one?

Knowing his love for hunting, after Uncle Lyndy retired, I asked him to come Elk hunting with me. He grumbled a little saying he wanted to go moose hunting but because of his lack of a partner he reluctantly came with me. We made the Elk trip for two or three years together but his longing was to chase moose. We went our separate ways. I continued to hunt unsuccessfully for Elk and Uncle Lyndy went moose hunting.

You have to understand something about my Uncle Lyndy; he was not the athletic type. His silent mantra was "If I can't drive there, I'm not going". Not the best attitude for a moose hunter.

But he was successful. He took moose two years running while I chased shadows, and hoof prints in the dirt. After our respective hunts were over and we compared notes, I supposed that he was onto something.

OK, OK... I was convinced that he was onto something. I took him up on his invitation to join him on a moose hunt; little did I know that this first experience would alter my life. Although we were unsuccessful that first year I joined him, I was hooked. I fell in love with moose country, moose hunting and the camaraderie of moose camp.

Uncle Lyndy, it's entirely your fault because now, admittedly, I'm obsessed, and everyone who knows me will agree. I live eat and breathe moose.

We had a lot of good times together at moose camp, enjoying the campfire and a few drinks too. He loved his rum, especially Mount Gay rum and I learned to appreciate this fine rum too. The funny thing about Uncle Lyndy and his rum and coke was he always seemed to place it at the exact same height as the tail of my dog Hobbes. Incidentally, his drink was always mixed in an empty Skippy peanut butter jar.

Uncle Lyndy didn't really liked Hobbes, mostly because she had a powerful tail, one that could easily remove a drink from a stump... time and time again. Uncle Lyndy never seemed to figure this out, even after we advised him to try a higher stump. Once or twice, he threatened to cut her tail off with the axe.

He loved his moose hunting, although he didn't seem to mind if he didn't get one. It was more to get outside, to enjoy the companionship of moose camp as long as it wasn't too cold, because that would send him scurrying to town.

He also knew that moose hunting was not a one person achievement. It takes a few strong men to handle a moose and to set up moose camp. And although his participation was more of a conductors role (a spinoff from his CPR days) he still liked to be involved.

Uncle Lyndy and I did not hunt moose together for about the past 7 or 8 years. I had found a better season to hunt and it was colder. But we always conferred about our moose hunts and shared our stories. I think I will remember this as the best part.

He loved to hear the stories of how, where, and when we got a moose. I think that somehow, through these stories he lived vicariously through the rest of us at moose camp.

Uncle Lyndy, you will be missed at moose camp, but you can be rest assured that there will be a Rum and Coke consumed for you. Moose camp will carry on and we will remember you.

I don't have a drink in my hand, but if I did, I would raise it. This one's for you Uncle Lyndy. To a moose hunter.

My Tribute by Mark Allardyce

Update September 2011: Robert who at the young age of 63 has passed on. I cannot believe that tragedy would strike down both my Uncle and Cousin in the same year. Robert liked to get out moose hunting too. He was not as keen as his Dad but liked the excursions just the same. Robert is survived by a son and daughter, his son Steve has taken up the flag and now will be chasing the loose moose too.

Top of the My Tribute Page

Return to the About Me Page