This river drift moose hunt was significant in that it is the 10th canoe hunt I've done, and quite possibly the last one that I will do for moose as early season tags are getting much harder to draw. It was also significant in that the hunt was done solo, and just the all around epic-ness of the whole hunt. So if you've got a few minuets, pour yourself a coffee and enjoy the read, if not just enjoy the pictures..... 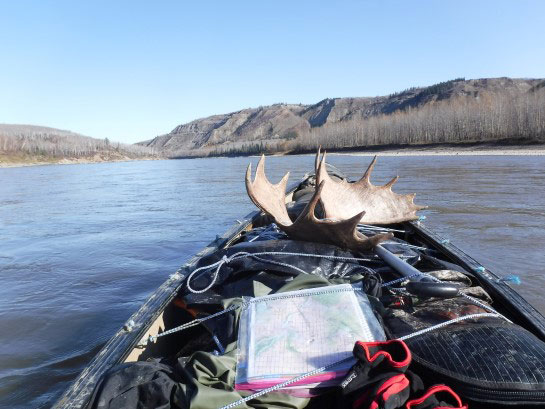 A hard week of river drifting and hiking paid off.
A bull moose antlers add decor to the river scenery.

First off, a huge thanks to a fellow (name witheld) and all around stand up guy, and great hunter by the sounds of it. He drove me to the put in point, and kept my vehicle at his house for the duration of the trip. We met for the first time over breakfast on the morning of the hunt, we drove to the put-in, and then I gave him my truck LOL.

On my first day I spotted a few cow moose as I paddled down the river. Each time I pulled over onto the opposite bank, glassed the area carefully and did some calling. I never did manage to put antlers on a moose that day however. Despite some strong upriver winds and my relatively late start I paddled about 30km that day and made camp late in the day. 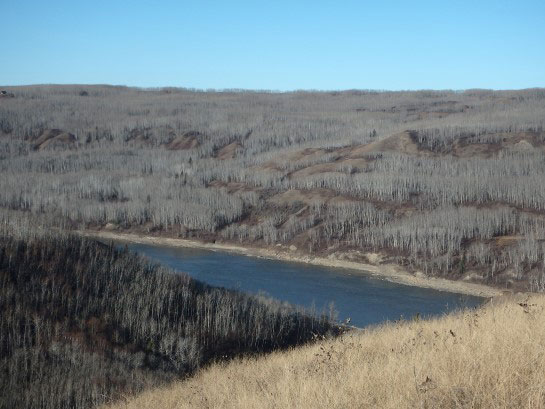 A high view of the river below. Sure glad I didn't have to pack a moose from up here!

The next couple of days I stayed along the river banks. I was seeing quite a few cow moose near the river, and saw a couple bulls higher up in the valleys. I figured if I kept calling it was only a matter of time until I got a bull to come out on the bank, where dealing with it by myself would be relatively easy.

A couple days into the river drift moose hunt however, two jet boats full of first nation hunters made camp upriver of me. These guys were buzzing past about 4-6 times a day, I saw them go by with two cow elk and what looked like a cow moose, at that point I didn't really want to call any moose closer to the river, so I started hunting higher.

The next day it got bitter cold, my Life Straw bottle became more or less useless, there was a lot of driving snow, and up and down the valley you could hear the crash of trees getting blown over. The wind made calling useless, and longer shots impossible. However it did give me enough noise coverage to still hunt some timber, even with the dry crunchy leaves.

If you ever decide to do a river drift moose hunt, pack minimally and make small camps. 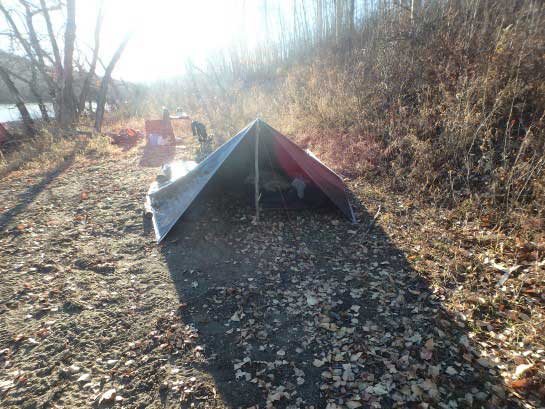 Crunchy leaves made for difficult stalking

I found some fresh moose tracks in the dead leaves, headed down a well worn game trail that I could move along quietly and decided that I may as well follow them. Without snow there was no way to tell the sex of the animal, but I figured it was about as good of a chance as any. I slowly followed those tracks for about 4-5 hours and eventually bumped into the cow that had made them at less than 20 yards. Not a bull, but I was pretty proud of myself for pulling that off on bare, crunchy ground.

Shortly after tracking the cow I saw a herd of elk further up the far side of the valley, and decided to go after them the next day. I hiked a couple kilometers back to camp and the paddled the canoe a couple km upstream so I could use this location to get into position the next morning. The next day was much like the previous, high winds and lots of snowfall. I hiked upriver to the canoe, crossed the river, then hiked another 3 km further upriver (and down wind) before climbing way up the valley. I hunted half the day up there and didn't see any elk.

About noon I looked across the valley and saw a moose, way up on the other side. It was hard to tell through the snow, but eventually I was able positively confirm that it was a bull. He was slowly descending off of a bench in a more or less south bound direction. My first feeling was that of disappointment, but the more I thought about it the more I became convinced that I just might be able to intercept him if I really got a move on. The moose was over a kilometer away and heading upriver, not accounting for the elevation, and my canoe was about a kilometer and a half downriver... I decided that I didn't have anything better to do that attempt a more or less impossible stalk. 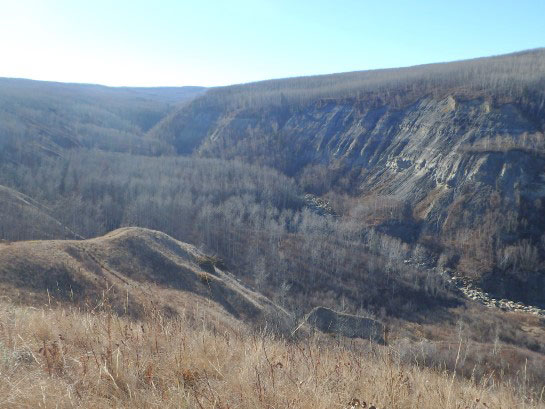 My solo hunt took me high into the hills.
What was I thinking?!

Never one to turn down a good challenge...

I barrelled down the side of the valley to the river bank, hoofed it back to my canoe down the rough bank, and then paddled the canoe back up the river as fast as I could. I landed about where I had seen the bull, I ditched my pack and then marched up the riverbank another half kilometer to get downwind of the bull... assuming he was still headed in that direction. The bush was impossibly thick and noisy so I had to move very slowly and only using game trails. I was trying to cut back to the wall of the valley where I figured the bull would be, but the game trails were not taking me there very directly.

All of the sudden I smelled him, he was close!

I hunkered down and did a few calls... nothing. After about 15 minuets I convinced myself that I must be smelling a wallow, and moved forward cautiously. About 10 yards further... BOOM!... a huge commotion right near the wall of the valley. It was too thick to see anything so I ran up a knoll, hoping to see over the undergrowth. The bull was charging straight up the wall, back up onto the bench he had come off of, right at the top he stopped broadside. I couldn't tell you the yardage, but it felt too far for me to freehand. He just stood there while I blundered around trying to brace my rifle on a tree, however the moment I found a rest he turned, giving me no ethical shot, and slowly disappeared over the edge. 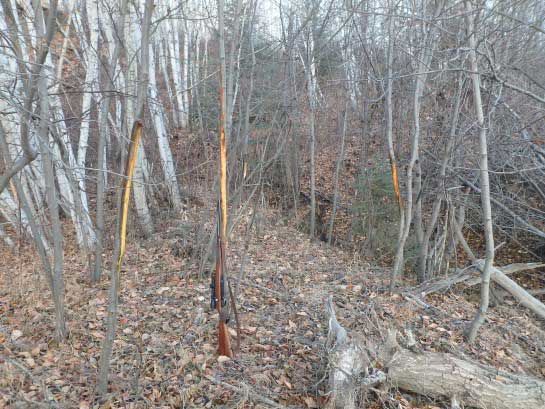 At that point I really should have given up, but I decided that I was going up after him, did you know a moose can pretty much run up a vertical wall? By the time I was nearly to the top, I was only still climbing because I was too scared to try to come back down. On top of the bench it was crazy thick, forget trying to move quietly, I was doing pretty good just to move at all. I did bump a moose near the top but never did see it, and finally decided that maybe I'd just have to give up on that bull.

That there is pretty much the most epic day I've ever put in. I think if I had had a partner on this hunt, no matter who it was, they would have talked me out of even attempting it. I cant even decide if nearly pulling the whole thing off makes it more crazy, or less crazy, but it was indeed crazy.

So the next day I decided to move further away from those jet boaters. I packed up in the dark and launched my canoe at the crack of legal shooting light to continue on with the river drift moose hunt. About 200 yards down river, just standing there on a gravel bar, was a bull moose... so I shot him.

"my left hand would involuntarily curl itself into a pretzel" 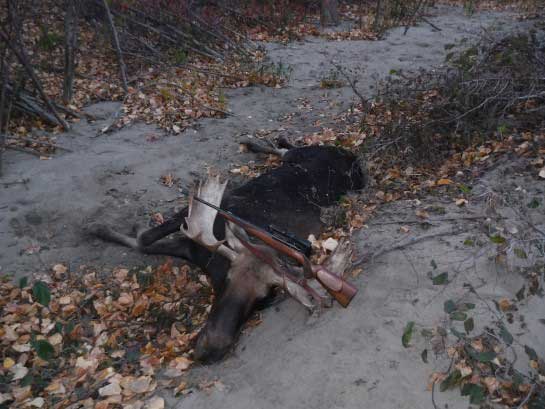 A successful river drift moose hunt. Now the work begins!
The rifle: is a Husqvarna lightweight carbine in 30-06, topped with a Leupold 1-4x scope and sighted in for 180 grain Corelocks

I only had to pack him about 100 yards to get him in the canoe, but still, dressing a moose, and packing it 100 yards over your shoulder is pretty hard work for one guy. I was back in the canoe by noon, doing my best to keep it headed downriver. 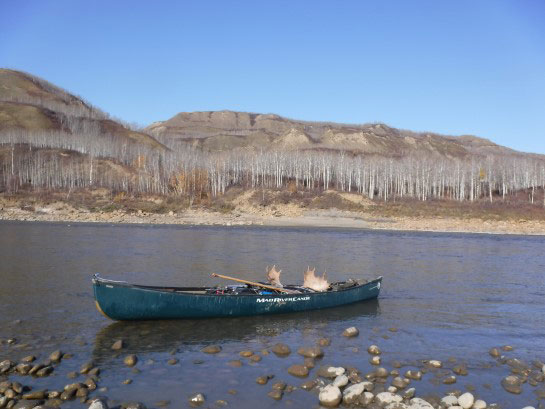 After the moose was loaded into the canoe, its was time to shove off and head home. But there was some physical hardship to endure first.

As usual my arms and stomach were cramping up like crazy, I literally could not even sit still without some muscle or other twitching and cramping.

My entire right arm was hard as a rock, but if I tried to rub it my left hand would involuntarily curl itself into a pretzel like shape, and I would have to use my other hand to straighten it out.

So mostly I just drifted and drank lots of water for a couple hours, eventually I recovered to where I could carefully do some paddling... despite my slow progress I managed to cover the 40km or so of river to the takeout before nightfall.

If anyone managed to read this far, I thank you, and hope that it has been somewhat entertaining, and I will end with the same line as I did on that 2015 hunt... More than the game we pursue, regardless of the outcome, its the hunt itself that is the real trophy. Good luck everyone.