Calling Moose... This particular morning as we snuck down the deactivated road we had in our mind to try to call a bull moose. It was not long before we spotted a cow and calf moose feeding on the far side of the meadow. Using our binoculars we scanned the area careful to study the timberline on the far side, hopeful to see a bull moose.

Be sure to use good quality binoculars for glassing. If you use inferior optics you will strain your eyes and make the viewing less enjoyable. Have a look at our recommended moose hunting supplies to see exactly what I mean.

We sat and observed the cow and calf moose for some time to see if there may be a bull moose in the area, or maybe one would emerge from the forest on the far side.... unfortunately we did not see one.

Using my range finder I determined the cow and calf to be approximately 450 yards away. "Too far away for an ethical shot" I whispered, “if there is a bull moose nearby, he'll have to come much closer than that".

We watched for another 10 minutes or so, while the cow moose and her calf continued to feed.

Patience is a virtue, especially for moose hunters. It is often a waiting game to see who will move first, or to see if you can get them to move in a favorable direction.

I know at this point a lot of other moose hunters would shrug their shoulders and move on, but we have a moose hunting tip. We use a birch bark moose call for calling moose. Read about them here. 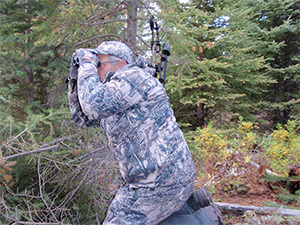 Typical moose habitat, you’ll find moose feeding along the edges of meadows just before dark and just after it starts to get light in the morning. You will not find many moose (if any at all) out in large meadows during the daylight hours.

I gave a cow moose call and waited....the cow moose did not even look up, she just continued eating. After waiting about 10 minutes I called again, this time I received an instant response....Ungh (commonly referred to as a grunt)...an unmistakable sound, a bull moose answered my moose call. He sounded like he was a long way off in the distance. I repeated the call nearly 10 minutes later, he answered again, but this time he sounded closer.

Calling moose is very exciting, if you are a moose hunter and you are not calling moose as one of your hunting techniques, you are missing out on some thrilling experiences!

By now the cow moose is paying attention, not to me, but to the approaching bull moose. I repeated this scenario many times over the next 45 - 60 minutes; every time the bull answered he was a little closer, although we still cannot see him. By now my heart is racing, adrenalin has reached every part of my body. A shiver races down my spine. Not from the -10 degree Celsius but from excitement.

When we finally saw the antlers of the bull moose moving through the forest on the far side of the meadow we broke another important moose hunting tip....No Talking.... well, we didn't exactly talk, we whispered and made approving gestures to one another. He was coming, but would he come close enough? You must be very careful to not be heard, moose have large ears so that they can hear... and they hear extremely well.

The bull cautiously entered the meadow and much to our dismay went straight to the cow and for the next two or three cow calls I made (10-15 minutes intervals), that bull just ignored me. He was tending her and was not at all interested in a cow that he could not see.

What to do? How do you make a man defend his woman... by offering some competition? I made ONE bull moose call and the unbelievable happened. The bull, instead of rushing over to where we were to defend his prize, herded the cow off into the forest.

We were disappointed to say the least. Calling moose is definitely not a science!

I am not one to give up easily, I continued my calling pattern for about another half an hour....then, "DID YOU HEAR THAT... Was that a Bull?" I whispered. 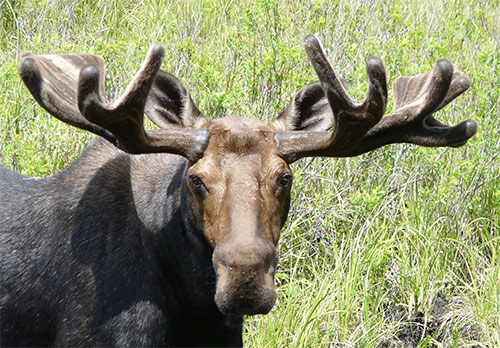 I couldn't believe my ears, the bull was coming back. This time he came out into the meadow, and was headed our way. He paused a couple of times to rake some small trees, trying to impress this cow that has been moose calling for the past couple of hours. Having used just a couple of moose hunting tips, we had a bull moose heading our way.

Again I made use of my Leupold Range Finder (another hunting tip), 110 yards and closing. He turned broadside and started to head into the downwind area of where we sitting; likely to try and pinpoint the cow moose that had been calling. I knew that if he winds (smells) us, it'll be all over, because he'll run into the heavy cover not far in front him. This important moose hunting tip must not be forgotten, you must ALWAYS take the wind into account (use a wind indicator), because moose have very sensitive noses and will leave the area immediately if they smell trouble.

To read about how to use the wind to your advantage as another moose hunting tip click here.

Fortunately he paused, my partner shot..... A perfectly placed broadside shot, just behind the shoulder. The bullet pierced both lungs and the bull moose went down after running about 25 Yards.

WOW, now wasn't that exciting, I'm sure we did the happy dance a couple of times. Calling moose really works! What a rush that was! Now the work begins. But that's another story.

If we would have followed the normal practice of hunters, we would never have known that the bull was in the area. Even if you don't see moose, calling is a very effective way to lure them.

Top of the Calling Moose Page