Are you heading out moose hunting in November? Check out our tips for a successful hunt during this late season moose hunt. To hunt moose during the late season, you'll have to have some luck on your side. 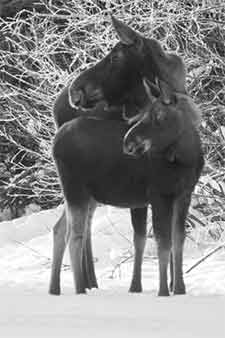 Cow and Calf Moose in November

After the rut, bulls will head back to the high country away from ponds, swamps and meadows. Cows on the other hand will stay put.

On your November late season moose hunt, what sex of moose are going after?

Depending on which you are hunting for will determine where you need to look and how you'll hunt your quarry.

Cow and Calf and Immature Bull Moose Hunting in November

FYI: In many areas immature bull moose are referred to as Spike Fork Bull Moose.

We can assume that immature bulls will be found in the same proximity as the cows, these young bulls tend to stay near momma.

Cows and calves will still be found near the ponds and meadows, just the same as in the early part of the moose season. They stay near these sources of food and water for safety. Cows will take their calves across a lake, river, swamp etc. to avoid or escape predators.

Cow moose will inhabit these areas until the deep snow forces them to move their wintering grounds which will be lower in elevation, likely with a south facing slope where there is less snow accumulation. 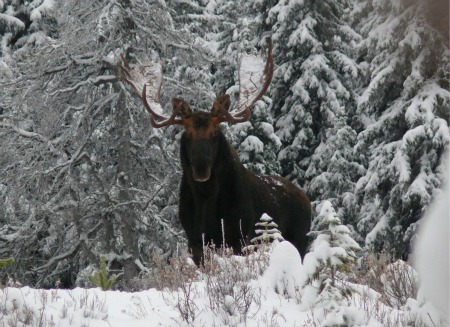 If you see a cow and you are looking for an immature be sure to watch the habits of the cow.
Sit and observe her as long as you can. It is quite possible that one of her calves from the previous year is with her, and it could be an immature (spike/fork) bull.
Just because you don't see any other moose with her at that moment doesn't mean she doesn't have others nearby.

If you are hunting the latter part of October and the first few days of November you just may be able to use cow calls to lure younger bull moose. These will be the bulls that were to immature to compete with the bigger bulls for cows during the rut. They'll hang around hoping for the chance at cows that didn't get bred during the main estrus period.