We have purchased the first of our Spypoint Trail Cameras (the IR-7) and thought we should do a web review for our website visitors.

Motion detection cameras that detect heat sources such as comes from big game and small game animals use infrared imagers to turn the thermal energy into electrical signals; these signals operate the trail camera.

You and I cannot see the thermal energy that triggers these cameras, the wave lengths are too short. Have you ever looked out over a sandy beach on a very hot day and seen the heat waves emitted? Well big game animals, as well as humans emit similar energy, on a much smaller scale.

Spypoint Trail Cameras was founded by two Canadian brothers, Yan and Sébastien Gagnon. The brothers developed the first camera because their uncle's cabin had been robbed repeatedly and they needed a source of security that ran with its own power to catch these intruders; and catch them they did! 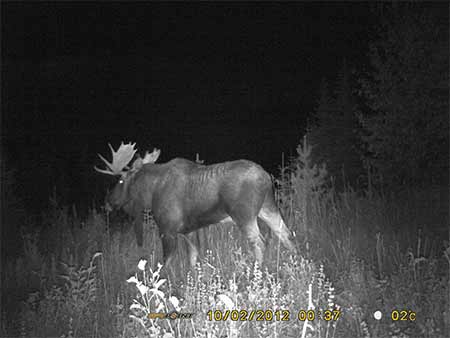 I had the camera shipped right to my door, and I must say right out of the box the camera looks good. I didn't waste any time and got the packaging removed.

Hefting the camera, I found that it is not lightweight (650 grams or 22 oz.), this is good, not too skimpy. The housing is made of some type of plastic which looks to be about 2.5 mm or .098 inches wall thickness. Most likely short of dropping the camera on the sidewalk or a bear chewing on it; the case should last a long time.

Removal of the camera from the case is easy, place your thumb on top of the camera above the LCD monitor and pry it away from the case. Reverse the procedure to replace it. Note: be sure to align the location pin on the bottom before re-inserting the top. 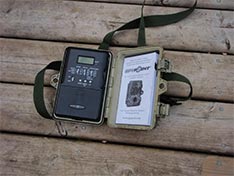 All controls are easily accessible.
If you want the manual fits inside too!

First impressions of the case for waterproofness… looks good. The door has a continuous O-ring rubber gasket, and all the lens covers in front of the camera case are rubber gasketed. Once we get the case in the field for some time, we'll find out for sure.

All controls for the camera are easily accessible once the case is open, there is no need to remove the camera from the case to make adjustments; of course you can if you like.

The menus on the camera are self-explanatory.

All of the 2012 model Spypoint cameras have a new feature that allows he user to adjust the delay time for photos to as low as 10 seconds. This will allow the user to acquire a lot more trail cam pictures. The downside of course will be the battery consumption will be higher.

As I mentioned, there is room to put the operation manual inside the case if you want, as well there is a decal on the inside cover with simple instructions. The manual is not weatherproof, but is available on the Spypoint Trail Cameras website.

The camera was set-up in a shady location, thus the poor light conditions.

Here are a few more photos this time taken with the Spypoint IR-5 trail camera. Thanks to Ken for sharing these photos with us!

This is what Ken had to say after receiving the trail camera he won on the moose photo contest:

I set up the new Spypoint IR-5 camera I won on the photo contest. I got 153 pictures in a week of whitetail deer,mule deer and moose. The pictures were very clear and had excellent coloring. This camera is as good as any of my more expensive cameras if not better. The camera is easy to set up and I will recommend it to all my friends. Thanks again.  I will send more pictures very soon.

Thanks for sharing these photos Ken. Something you might like is a new model for 2013, the Spypoint HD7

These trail cameras made by Spypoint will be a great tool to add to the photographers kit. Want to get quality wildlife photos, then use one of these cameras.

As an item of moose hunting supplies these cameras can and should increase the individual moose hunter's success rate.