In the following Wolf Photos it is hard to tell that these carnivores are any threat at all. They appear to just be pictures of dogs, but do not be deceived as was Grandma in "Little Red Riding Hood".

Wolves kill and eat other animals for food. Depending on where they live, wolves live mainly on the meat from such animals as deer, moose, elk or bison. They also eat beavers, rabbits and even mice.In the far north wolves have been documented to survive on diets of almost entirely mice until the caribou herds return.

When they have sufficient habitat and food and are occasionally hunted, wolves will usually try to avoid contact with people, to the point of even abandoning their kills when an approaching human is detected.
That said, Wolf numbers are increasing and so are the instances of human conflict. 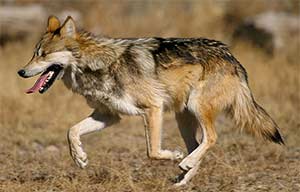 Considering the potential threat because of their size and predatory nature, attacks against humans are rare, usually as a result of a rabid wolf; although in 2010 a school teacher was killed and fed upon in Alaska.

I have hunted all of my adult life and I have never seen a wolf in the wild. I have found their tracks and heard them howling (sometimes too close for comfort) and have seen scat left behind by them, but actually seeing one...no. This year (2011) I was able to record several packs howling.

Hearing wolves and seeing them are definitely two different things. What a hair raising experience it must be to have a direct encounter. Dan, one of our site visitors had a wolf attack, close call with a wolf pack and shared the encounter with us.

The incidence of human and wolf encounters in British Columbia and across Canada are on the rise. Everywhere we have hunted moose in recent years we have come across fresh wolf sign and heard wolves, as a result of higher wolf numbers the moose in several locations have been forced to move to new habitat.

As a result I know of several guides who now target wolves. The higher numbers of wolf packs and the toll these wolves are taking on livestock have forced many ranchers to take action and they are now offering a bounty for each one killed.

In his essay The rare observation of a common occurrence: East Pack kills a bull moose by John A. Vucetich. John relates a firsthand experience that he and his pilot observed, a truly amazing account of how it happens in nature.(http://www.isleroyalewolf.org)

NEWS: The Government in British Columbia changed the hunting regulations for the wolf hunt in 2011. There is now, no bag limit and no closed season for most of the province.

A Wolf laying down, This wolf Photo is from the National Digital Library of the United States Fish and Wildlife Service. January 2003 by Gary Kramer

Here is my close encounter with a wolf story.

It was late September and I was hunting Moose in Northern British Columbia. The early morning light made everything in the forest look grey. As I quietly followed the edge of the creek-bed, I noted that there was not a sound to be heard. The forest was still asleep.

I knew from my surroundings I was not far now from the edge of the beaver pond which overlooks a large meadow. Here I was hoping to find a Bull Moose.

When I hunt like this (still hunting), and the only discernible sound is the rustle of the leaves under my boots; it gives a hunter a heightened sense of awareness.

Now imagine yourself in my position. Moving silently through the quiet forest, no sounds to be heard when suddenly......

.... Such a wolf howling began. Listen to a wolf pack howl I recorded this year. The hair on the back of my neck instantly stood on end. I have been wandering the wilderness (hunting) for enough years to recognize wolves howling (actually it is kind of cool to hear them), but that was not the issue.

It is not uncommon to hear wolves howling off in the distance, this was different these wolves were close, too close! I knew from the direction the sound was coming that the wolves were between me and the beaver pond which, although I could not see it, I knew I was very close to the water’s edge.

Honestly, I think I may have been just a little bit afraid at that point. I knew that there was no documented account of a healthy wolf ever attacking a human but when you are that close to wolves it can still be a little unnerving. It really makes a person second guess himself.

One part of me wanted to turn and leave the area and the other wanted pictures. I pressed forward hoping for a glimpse, a fleeting shadow ... nothing. It did not take long before I found where the soil was freshly disturbed and in the center of the area were fresh wolf tracks. I did not actually measure what the distance was between where I was when I heard the wolves and where I was at this moment, but I know it was under 100 yards.

I thought to myself there will certainly be no moose left in the area, maybe I could capture a wolf photo with my camera.

I never did see any more sign from those Wolves, but as they moved further away they periodically would howl, giving me a reminder that they were still in the area. Wolves are very smart animals, so I do not know if they knew of my presence but they moved away from me and to tell the truth I was not totally disappointed.

UPDATE: Apparently in 2010 a school teacher in Alaska was attacked and killed by a pack of wolves. If this killing confirmed, it will be the first documented killing of a human. In recent times I have been hearing more and more stories of woodsman being stalked by wolves...

December 2011 - Now confirmed, Candice Berner was indeed attacked and killed by wolves while out jogging. The full story is posted in: The Alaska Dispatch. (http://www.alaskadispatch.com/article/wolves-killed-alaska-teacher-2010-state-says

Click to see image of wolves chasing an Elk- Typically wolves hunt moose and elk as a pack, although individual wolves have been known to hunt and kill adults. This photo clearly shows wolves attacking a bull elk.
Photo courtesy of http://carnivoraforum.com 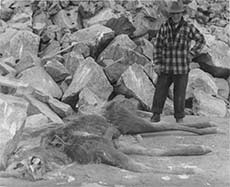 Wolf Skull - from a trap-line. Or click here to see a wolf skull sketch from 1849 and to see a Wolf Skeleton Sketch Sketch Date 1893-96

We all like to read about and see photos of wolves. If you have one you would like to share with others please do so by clicking here.