The moose photo contest invites you to share your moose pictures. The contest isn't limited to live moose so your pictures can also be from your hunting trip and of course there are some great prizes to be won again this year.

This year again we will be offering some fantastic prizes. Be sure and collect your best live moose and moose hunting pictures as you can this year.

New this year! Because we had some requests we thought we would allow videos to be entered too. In order to submit a video just include a link to the location and you are set. Please though, add a picture or two either from your video (screen shot) or other to keep your submission interesting. You are still required to write at minimum 50 words to describe your entry. 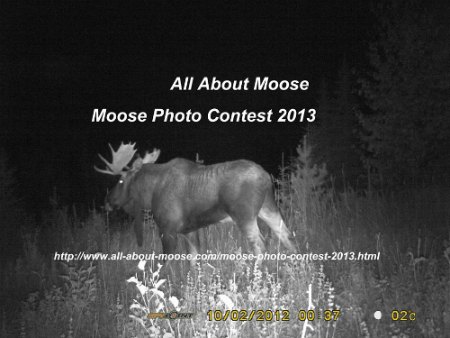 The moose photo contest will run until midnight April 30, 2014, so there is lot's of time to enter multiple times. We'll be using Random.org to pick the winners of the prizes for the contest.

Based on feedback received we have decided to amend the rules for the contest as follows:

The best photo/video will receive top prize then the others will be awarded using Random.org to pick them. The winner will be able to choose between the Badlands Backpack or the Spypoint Trail Camera.

What Types of Moose Photos?
Pictures of live moose and your moose hunting pictures. Videos are also ok.

We would love photos that include moose… with or without you.

The moose pictures must be your own (or you have permission to use) and not subject to copyright. Any pictures that are submitted and found to be "hacked from someone" will be disqualified and removed from the contest immediately.
Note: You may only enter the same picture one time.

The following prizes will be awarded by random draw.

If you are chosen as one of the winners, you could win one of the following items:

The rules are simple enough. Post your photo or story (must include at least 50 words) of ORIGINAL content. Don't go copying from the internet... anyone can do that. Go out, armed with your camera and take some moose pictures, then tell us something about them. It's not hard and we'll enjoy all of them.

We would like to thank all those who participated in our contest this year, 29 entries in all. Awesome!

It was a tough  to choose this years top winners as we had some great entries.

Honorable mention goes to Kathy B for her moose photos "4th of July Guests" Kathy shared her first ever moose encounter pictures with us.

We are in the process of contacting the top prize winners so they can chose their prizes. Once that is complete we will notify everyone else.

We had so many good entries this year -- really it was amazing. I look forward to receiving your entries to the next Moose Photo Contest 2014 which we will be announcing in the near future.

Click below to see the moose photos others have submitted to this webpage...

I have always been the scouter never the shooter. Love to hunt runs in my family. This year I got drawn for Bull Moose so it was my time to shine! …

My dog and I were hiking just before the hunting season began. We were drawn to two moose doing the mating dance. As we were fixed on them, we suddenly …

I drove to Alaska merely to see moose. Well ok, any wildlife, but moose are among my favorites! I happened upon Chena Hot Springs Road and it was …

An early morning cow moose Not rated yet
This pic was taken off my trail cam at about 5:30 am. Thanks Gary for sharing your trail camera cow moose picture. To give you an idea where …

It's spring. No young moose calves yet! Not rated yet
Spotted them on side of Hwy 535 near Sudbury Ontario. Yes spring is in the air, and it's soon time for the cow moose to give birth to their calves …

Moose Collision Not rated yet
Later on during the rut last year I was on my way home from work when I spotted this bull moose on a cut line. I actually have a video of me sneaking …

Just Before Hunting Season Not rated yet
Well these pictures were taking just out side of grande cache Alberta. Just before hunting season one morning on my way to work. There were 3 younger …

Majestic Mom Not rated yet
Fall morning 1 week after moose season !!!! Picture perfect 1 What a great picture of a cow moose and her calf, almost as though they stopped and …

Bull Moose Claims Cow as his Own  Not rated yet
A big bull approaches a cow in the meadow during the pre-rut. He moves in as if in slow motion to check her out. Two small bulls enter the scene …

4th of July Guests Not rated yet
We were camping on East Buffalo Pass in Jackson County National Forest in Colorado. Every morning we would be greeted by several moose in the area. It …

Bull Moose in my Backyard Not rated yet
These photos were taken in my backyard in Park City, UT. This bull moose was taking a rest and then continued to strip the leaves off of our trees. …

Momma Moose and her Two Calves Not rated yet
These photos were taken at the base of Ecker Hill Mountain in Park City, Ut near where two streams converge. Park City, well know for it's 4 local …

Small Bulls Play Fight Not rated yet
A small spike bull comes behind a three point bull and cow as they walk in the meadow. He then lowers his ears and moves aggressively towards the bigger …

Cow Moose Checking out the Orbs Not rated yet
-30 here in Vanderhoof. This cow moose has been hanging out on my 5 acre property and I sat on my back steps and shot photos of her eating willows. She …

Immature Bull Moose Summer Antler Growth Not rated yet
These pictures were taken by my trail camera. A small bull and two cow moose came in to the meadow where they spent a lot of time wandering and laying …

Here's a Hat Rack Not rated yet
This guy was hard to knock down. As I found out this moose had been shot the year before. The next year I was talking to the guy who had shot it. Apparently …

Moose in the Rut Not rated yet
A big bull follows a cow to a spot directly in front of my trail camera. The bull digs up the ground, urinates on that spot and then uses his antlers to …

Shed Head Not rated yet
Was out looking for shed antlers and saw a moose standing in a cut trail, nothing out of the ordinary for the area I was in, but then I noticed he only …

Moose Looking for Love Not rated yet
Watched this guy chase the cow around for over a hour. Even though it was apparent she was in heat, she was having nothing to with him and all he could …

My First Archery Moose Not rated yet
My Dad and I went for a walk north down a Power line scouting for signs of moose. We started approaching the crest of a 200 yard hill when my dad said …

What the Wolf's left me! Not rated yet
This a Pic of a 47 inch Moose Rack that I found while Moose Hunting. My Buddy & I stopped to check out this spot for signs of Moose in a clearing when …

Saskatchewan Moose Not rated yet
Two small bull moose we had many opportunities to shoot, maybe next year we'll find a bigger one. We are in Saskatchewan and we don't have a blind set …

Momma and Babies Moose Not rated yet
After returning from my annual trip to western Alberta I hunt locally around where I live north of Edmonton. One morning I ran into a lovely cow and her …

Tough Guys Not rated yet
Was out for a ride in a area where loggers had just finished cutting, it was a clear crisp morning when these two were in a cut trail sizing each other …

Close & Personal Not rated yet
I was out preseason scouting for a upcoming moose hunt when I seen this guy bedded on a ridge about 100 yards off the road. I slowly crept up the hill …

Snowy Face Bull Moose Not rated yet
A couple buddies and I found a spot where 4 bulls were wintering in the Colorado high country. We went back every weekend until we couldn't make it in …

Return to the Free Contest Page